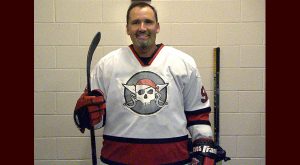 As many who have taken a spin on the ice this winter can attest, learning to skate as an adult is not easy. Now imagine learning to skate at high speeds — not just adequately, but so well that it becomes second nature — while also dodging oncoming hockey sticks and attempting to send a three-inch puck into a goal more times than the opposing team. For corporate attorney and lifelong hockey fan Michael Mercurio, joining an adult ice hockey league about a dozen years ago meant plenty of falls on the ice — but also the opportunity to meet like-minded professionals, spend some late nights at the rink and to play a sport he never got to as a child. “You’re not even thinking about the skating, because you have to think about playing the game,” said Mercurio, chairman of Offit Kurman’s business law and transactions practice group. “Falling is no big deal because you have all this equipment on. It’s not that it doesn’t hurt, because it can, but you’re much freer.” Click here to read the full article the dailyrecord.com.

Business attorney and M&A lawyer Michael N. Mercurio serves as outside general counsel on matters related to business law, M&A, and real estate law As a strategic partner to firm clients, Mr.  Mercurio regularly counsels entrepreneurial individuals and assorted entities on all aspects of business and commerce, with a core specialty in mergers and acquisitions—both from the sell side perspective and buy side perspective.   You can also connect with Offit Kurman via Facebook, Twitter, Google+, YouTube, and LinkedIn. WASHINGTON | BALTIMORE | FREDERICK | PHILADELPHIA | WILMINGTON | VIRGINIA