The World’s Most Liveable Cities 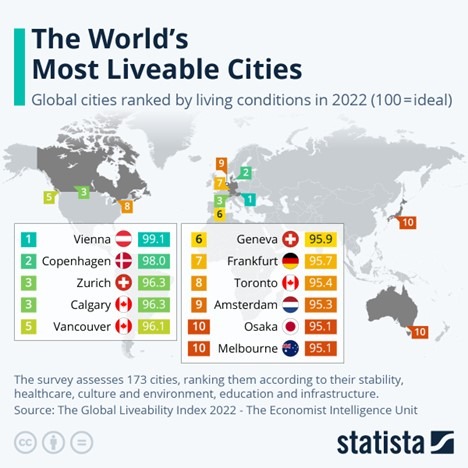 Each year, The Economist publishes a ranking of the cities with the best living conditions. In 2022, the list was influenced not only by the Covid-19 pandemic but also the war in Ukraine, with Kyiv being removed from the survey and both Moscow and St Petersburg seeing a fall in their scores due to “increased instability, censorship, imposition of Western sanctions and corporates withdrawing their operations from the country.” Several Eastern European cities also slipped down the rankings in light of increased geopolitical risks.

The Austrian capital of Vienna has been crowned once more as the world’s most liveable city. It’s been three years since the city last held the title, but with countless options for culture and entertainment, as well as its stability, good infrastructure and excellent healthcare, it has returned once more to the prized position, having secured an impressive score of 99.1 points out of a possible 100. The Danish capital of Copenhagen and the Swiss city of Zurich are the next two cities to round off the podium.

While it’s true that six of the top ten places in the grouping can be found in Europe—with two cities sharing the third and tenth positions—Canada is the best-represented country, with three metropolises (Calgary, Vancouver and Toronto) in the Top 10. According to the study, one reason these Western and Canadian cities score so highly is because of their high Covid-19 vaccination rates and the easing of the cities’ restrictions.

U.S. cities are notably absent from the top rankings. Houston saw one of the biggest falls from grace, slipping some 25 places down the list to index number 56. This was because the early loosening of Covid restrictions had meant the city shot up the list in 2021. As other cities opened up, too, it was relegated once more.

The study is based on the “Global Liveability Index,” which determines and compares the varying quality of life of each city’s residents, grouped under five subcategories: infrastructure, healthcare, culture and environment, education and stability. The full list comprises 173 cities.