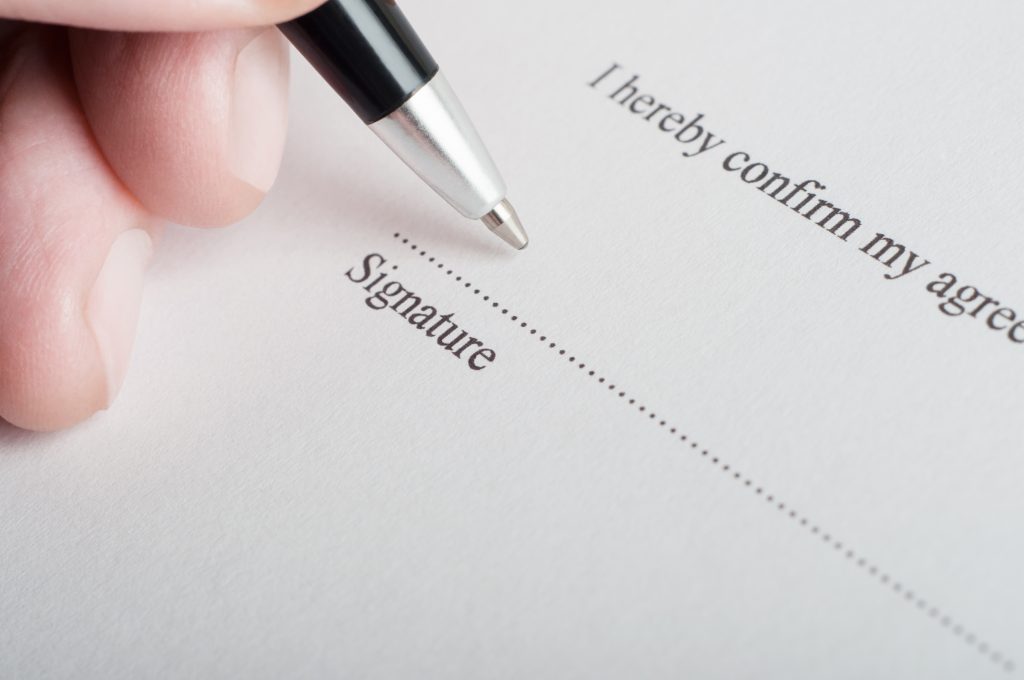 Every so often, I get invited to give a presentation on my “Top 10 Things Small Businesses Do Wrong”, which is a list of the most common offenses I see when a client approaches me with a problem. The list is comprised of common-sense tasks that busy entrepreneurs frequently overlook, or simply did not consider when going about running their companies. As a lawyer who writes contracts for a living the one that surprises me the most is how many people think they have a contract when there are no signatures on the agreement. In most scenarios, if the parties have not signed an agreement, no valid contract exists.

The signatures on a contract indicate that the offer has been thought about by the parties, and then accepted. Traditionally, this has been done by the parties signing their names or, if the party was unable to write, “making one’s mark” by drawing an X on the signature line. Without a signature, there is a presumption that the parties did not have an agreement.

The person signing the agreement should be the named party in the contract, or an agent of the named party. For instance, if the party is a company, then the authorized person for the company should sign on behalf of the company. The agency is typically indicated by a “By” line with the agent’s name, followed by a “Title” line with the agent’s capacity (Owner, President, Contracts Manager, etc.) This shows that the person signing has been given the blessing by the company to enter the agreement.

Notarized signatures are used when the deal, or the parties, require proof from a third party that identity and capacity of the signer has been verified. This is frequently used in situations where the signer may no longer be available to testify to their signature. A common example of this is a will, where the person signing will be deceased when the document is reviewed. Another example is a deed, where the document will be filed with the local land records office by the title agent, and the seller and buyer are not present to prove they agree to the deed transfer.

E-signatures are becoming more common, with the passage of the Electronic Signatures in Global and National Commerce (E-SIGN) Act in 2000. This allows parties to digitally distribute and sign a contract without requiring a “wet” signature where pen goes to paper. Not everything can (or should) be signed digitally, but it can make the execution of an agreement quick when the parties are physically distanced.