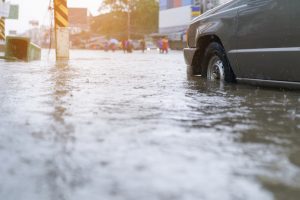 Grandfather Golf and Country Club is a resort community in Linville’s North Carolina mountains, comprised of 250 single-family homes and 150 condominiums. One day in May 2018, the community experienced four inches of rain in two hours – something that had not been seen in recent memory. Bridges and cart paths on the golf course were washed away. The clubhouse flooded. Maintenance personnel reported that the force of the water flowing down the Linville River was so great that it dislodged boulders the size of a kitchen table.

This article is the first of a two-part series exploring the repercussions on communities and homeowners regarding the increasing number of flooding rains we have witnessed in our region over the past few years. Let me begin by saying I am not a climatologist. I have not researched historical weather and climate data. It is not my intent to express an opinion on whether climate change or global warming is real, and if so, whether it is naturally-occurring or caused by human activity on our planet (please don’t e-mail me to argue about climate-change deniers or conspiracy theories). This column is based purely on the observations of myself and those I have interviewed.

A Charlotte TV weather forecaster reported that the year-to-date rainfall amount for the area is almost 13 inches above normal as of mid-October. Many of the HOAs I represent have experienced a dramatic increase in flooding areas that didn’t use to flood. This can result in damage to HOA-owned common elements and individual homes.

Dr. Jeremy Porter works with First Street Foundation, a non-profit research and technology group that has been compiling data on America’s flood risk. The Foundation works with several prestigious universities and federal agencies such as FEMA, NOAA, and the National Weather Service. Dr. Porter reports that in the period from January to September 10, 2020, the NWS issued 484 flash flood warnings in North Carolina, more than every year in the past decade.

I spoke with Dr. Porter by phone to better understand the data the Foundation has collected and analyzed. This data gives insight regarding the number of properties throughout the U.S. that are at risk for flooding or “extreme rainfall events.” The trend report can be found here »

According to the Foundation’s report, the Charlotte area currently has roughly 17,500 properties (commercial and residential) that are at high risk for “extreme rainfall events” and flooding, and that number is expected to increase between 5% and 10% over the next 15 years for most of North Carolina. South Carolina is expected to see similar increases. Additional information can be found at www.FloodFactor.com. From this website, you can enter your zip code and obtain a wealth of information about your area’s flood risk.

DAMAGE TO HOMES AND COMMUNITY BUILDINGS

I spoke with Alan Shuping, the Director of Facilities and Infrastructure for Grandfather Golf and Country Club. He said that the annual average rainfall in Avery County is about 54 inches. In 2018, the county had over 100 inches. 2019 rain was also above average. I asked Alan what they are doing differently to deal with the problem. He responded, “we have a few condo buildings where we sandbag the lower levels before heavy rain events, so we have kept sandbags in stock for several years. We have also moved to the absorbent socks as a preventative measure for doorways in some of the buildings.”

Alan expects to purchase a drone to perform condominium roof inspections because of the frequency of weather events and the difficulty of examining the damage. In Alan’s estimation, “rain saturation and wind contribute to falling trees, so we have started being more aggressive in the past couple of years with removing dead trees on both condo property as well as club property around the condos.” The club has begun to more-closely monitor trees that show signs of decline.

Phil Henderson of Henderson Properties, which manages HOAs and condominiums in addition to offering a full array of real estate services, reports that many of his communities are bolstering their annual budgets to pay for tree replacements, as thunderstorms are toppling more large, old-growth trees due to the saturated soil.

Ben Rhodes is the General Manager for CAMS, another HOA management company. Ben says that he sees many communities boosting their budgets for preventative maintenance on roofs, vent pipes, caulking, gutters, and downspouts to stop water intrusion through building envelopes. Ben notes that when communities don’t set their dues at an appropriate level to establish adequate reserves or properly budget for maintenance and repair of items such as this, the homeowners often face an extensive special assessment by the HOA to replace entire systems when a little preventative maintenance and proper reserve planning could have avoided that result. Ben frequently encounters condo and townhome owners who assume that the HOA is always responsible for repairing damage to unit interiors when water penetrates the building envelope. In many cases, the cost of repairing that interior damage falls on the unit owner, not the HOA.

Many of my condominium and townhome association clients see a dramatic increase in water damage and mold infestation due to water intrusion through roofs, foundations, building envelopes, and even over the threshold of entry doors. Common entry points are aging mortar joints and caulking, joints or transitions that were not adequately flashed during construction, penetrations or gaps in siding or roof shingles, construction defects, and stormwater systems that were not designed to handle the amount of rainfall we are now seeing.

The next part of the series examines the law and recommendations for HOAs and condominiums facing these unprecedented concerns.