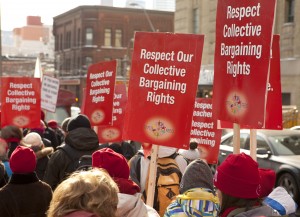 In an unsurprising yet anti-climactic decision, the Supreme Court on Monday, March 30, 2016, upheld a lower federal court decision in Friedrichs v. California Teachers Association,  which empowers public sector unions to collect mandated fees from bargaining unit employees who desire to not join such unions.  In a 4 to 4 decision, the Court published its truncated decision in the case that was orally argued in the Court in January of this year.  Significantly, between the time that the case was argued and yesterday’s announced decision, Justice Scalia suddenly died. Prior to his death, the case probably would have been decided 5-4 against the unions, but nonetheless was transformed into a decision, that at least for the current term, will allow public sector unions to continue to charge non-members what are referred to as “agency fees” related to certain collective bargaining activities that they engage in on behalf of the entire bargaining unit. While this decision arguably only affects public sector unions, it is reflective of a trend that may continue in the Court until a ninth justice is confirmed, e.g. 4-4 decisions which provide no real decisional precedent and which simply let stand lower court rulings.  Prior to Justice Scalia’s death one would predict that many, if not most, of employment/labor-related cases making their way to the high Court would be decided in a pro-employer manner, with Justice Scalia being in the majority.  Now with Scalia’s death and a new justice being appointed at some future date, the decision-making matrix will surely change in some manner depending on who the Senate confirms as the ninth justice.  It is noteworthy that even if President Obama’s nominee, Judge Garland, is confirmed as that ninth justice, there is a prior track record for him of  being somewhat deferential to administrative agencies like the National Labor Relations Board, Equal Employment Opportunity Commission, and the Department of Labor.  Thus, in the event that Judge Garland is confirmed, it is not unlikely that in labor/employment cases that get to the Supreme Court he may be in the so-called liberal majority that rules in favor of employees/unions. At some point the issue which resulted in a tie vote at the Court will make its way back to the high Court once a full slate of justices is in place.  For now, uncertainty prevails for employers who regularly monitor the judicial goings-on at the Supreme Court level involving labor/employment issues.  As always, however, the best defense to any employment-related legal risk is to be proactive regarding workforce policies.  Our labor and employment attorneys are always ready and extremely able to provide efficient, yet highly competent advice to employers who desire to protect themselves from litigious employees and unions.  One way to achieve such protection is for employers to work with labor and employment counsel to conduct workplace audits and managerial training.  Please contact us if you would like more information regarding such audits or managerial training services.