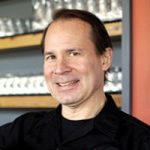 Jim Caruso is the CEO and General Partner of Flying Dog Brewery in Frederick, Maryland. Founded by astrophysicist and rancher George Stranahan in 1990 in Aspen, Colorado, Flying Dog was one of the first brewpubs to open in the Rocky Mountains. Sixteen years later, the company purchased the Frederick Brewing Company, which eventually became Flying Dog’s headquarters after the closure of its Denver facility. Today, Flying Dog is the largest brewery in Maryland and the 37th largest in the US. Emblazoned with names such as Raging Bitch, Bloodline, Snake Dog, and Fever Dream, Flying Dog’s labels feature art created by Ralph Steadman, who connected with the company through a mutual friend of Steadman’s: Hunter S. Thompson.

Can you take us through the history of Flying Dog?

JIM CARUSO: Flying Dog started as a brewpub in Aspen, Colorado in 1990, over on Cooper Avenue, founded by George Stranahan—a true Renaissance man. His grandfather invented the Champion spark plug—also the ACDelco spark plug—sold them directly to Henry Ford and Alfred Sloan. George has a PhD in physics; he was Head of the Physics Department at Michigan State University. He’s founded three progressive schools that are still in existence today. He’s a professional photographer, a writer, and he had a music studio. He created the Woody Creek Tavern by converting the old post office in Woody Creek to what has become an institution there that everybody has to visit.

In the late 1980s, George was protecting the land in Woody Creek from some of the development that took place in Aspen, and was buying that up through some different parties, and bought what is now Olive Farm. Hunter S. Thompson had been in Aspen, Colorado—he had just finished his book that was written when he had embedded himself with the Hell’s Angels—and George invited him to rent that property. And Hunter did, and lived there from 1968 until his death in 2005. In 1990, George created the Flying Dog Brew Pub, did some renovation on it.

The name Flying Dog comes from a trip that George took to climb K2 with his teenage daughter and some other innocent people. They had no tactical climbing experience. They even had a flag—they called themselves The March of the Innocents. K2, if people aren’t aware, is the most dangerous mountain in the world. Its nickname is the Savage Mountain. It’s the only major mountain that has never had a name. K2 is the surveyor’s name for it—it’s in the Karakoram range: K1, K2. It’s so remote it’s never even been climbed in the winter. So, George heads to Rawalpindi, Pakistan, finds some unsuspecting Sherpas to guide them up. On day 17, they run out of alcohol, and they were some pretty serious druggies and drinkers back then. On this journey was the famous economist Lester Thoreau and some other individuals. They make it back to Rawalpindi 32 days later and they’re exhausted, oxygen-deprived, alcohol-deprived. Much to their dismay, they realize it’s a dry country and George had to seek out an attorney so he could file an affidavit declaring that his father was a Christian—they didn’t care what his mother was—so that they could get some nourishment and some alcohol. In the room is this beautiful painting—not like paint-by-numbers—of a dog in a position that you never see a dog in: almost like Superman, with its four legs extended, its ears brushed back—kind of an English spaniel—its legs tucked up underneath it. They couldn’t figure it out. They finally decided that a local artist must have misinterpreted the concept of English bird dogs, because the British had been in that area during the Raj for many years. This local artist thought “bird dog—a dog can fly,” so they named it the Flying Dog—the first time in the English language that those two words were put together.

When George went back to Woody Creek, he started renaming everything Flying Dog, including his ranch which used to be called the Lower Collins Creek Coyote Preserve, and he renamed it Flying Dog, and he had these hats. His neighbors said, “George, this is brilliant. That’s such a great name. Can we have one of those hats?” He named his music studio Flying Dog Music Studio. So, when he opened Flying Dog Brewpub, so that the locals could have a hamburger that cost less than $40, he had to name it the Flying Dog Brewpub.