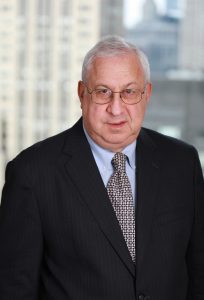 Offit Kurman is pleased to announce today that Stephen Siller has joined the firm’s offices in New York. Mr. Siller will serve as a Principal-level attorney with the firm’s Business Law and Transactions Practice Group.

Mr. Siller’s points of distinction include selection as a Metro New York Super Lawyer by Law & Politics magazine in the areas of Business/Corporate, Mergers & Acquisitions, and International Law, an AV Preeminent® rating by Martindale-Hubbell, and inclusion in multiple Marquis Who's Who publications—such as Who's Who in America, Who's Who in American Law, and Who's Who in the World.

Over the course of his career, Mr. Siller has held adjunt teaching positions at institutions such as the New York University’s Stern School of Business. He has also served in membership and/or leadership roles at numerous legal and business organizations, including Vistage, IR Global, the International Bar Association, the American Bar Association’s Negotiated Acquisitions Committee and Committee on Partnerships and Unincorporated Business Organizations, and the Association of the Bar of the City of New York’s Transportation Committee and Committee on the United States in the Global Economy.

To learn more about Stephen Siller and to contact him, please visit his attorney page. More information about Offit Kurman’s comprehensive legal services can be found here. For details about Offit Kurman’s office locations and directions to the firm’s offices throughout the Mid-Atlantic region, click here.