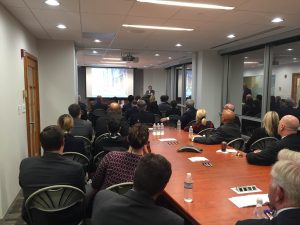 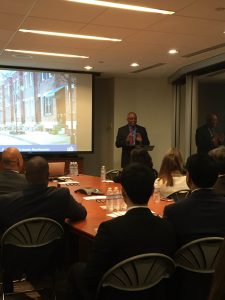 President Schmoke served as the Mayor of Baltimore City for twelve years and was the first African-American elected to the office. Throughout his career, he established himself as a leader in public service and higher education, advocating for progressive advancements in education, fair housing, economic development, and civil rights. During his tenure as Mayor, he received a national Literacy Award from President George H.W. Bush, and President Bill Clinton designated Baltimore an Empowerment Zone in recognition of the city’s housing and economic development initiatives.

President Schmoke led an open discussion regarding how to address critical diversity objectives both within urban centers such as Baltimore and the workplace in general. During his presentation, President Schmoke described the negative impact that segregation has on a city like Baltimore, while offering concrete suggestions on how to limit, if not eliminate, such impact. He noted that he has learned throughout the years that, although people may come from diverse backgrounds, everyone shares similar aspirations and goals in life. President Schmoke also provided helpful suggestions on how the attendees could advance the goals of diversity in their workplaces.

ABOUT THE DIVERSITY SPEAKER SERIES

The Diversity Speaker Series is an important initiative of Offit Kurman’s Diversity Committee. Established in 2015, the Diversity Committee is dedicated to demographically reflecting the communities in which the firm practices, promoting inclusion at the firm, and providing growth opportunities for attorneys of all races, ethnic origins, religions, and sexual and gender identities.