When it comes to whether an insurance carrier has to provide coverage for a man injured during a murder-suicide, “context is everything,” an attorney representing Erie Insurance told the Pennsylvania Supreme Court.

Allan Molotsky of Fowler Hirtzel told the justices Thursday, during the oral argument session in Erie Insurance Exchange v. Moore, that they needed to view the deadly encounter as a whole in order to determine whether the non-fatal shooting of a third party during the incident should be viewed as an “occurrence” under the insurance policy, triggering the carrier’s duty to defend.

The shooter, Harold McCutcheon, “made intentional decisions to get to this point,” Molotsky told the justices. “There were a series of decisions and you can’t take them out of context.”

The facts that Molotsky asked the justices to take into account stem from the 2013 incident where McCutcheon fatally shot his ex-wife, Terry McCutcheon, before he shot her then-boyfriend, Richard Carly, in the face, and then fatally shot himself. Molotsky noted several times that, before the shooting, Harold McCutcheon allegedly grabbed and pulled Carly into the home and then the two got into a fight.

Although the complaint that Carly later filed against Harold McCutcheon’s estate said the shooting happened accidentally while the two were struggling over the gun, Molotsky said words alleging the shooting was “accidental,” “reckless,” or “careless” were conclusions of law that needed to be disregarded by the courts.

However, Justice Max Baer said that, at this stage of the case, the plaintiff gets the benefit of having all facts and inferences taken as true.

“I don’t think I agree with your standard that it’s purely a question of law,” Baer said. “At best it’s a mix of law and fact.”

The facts alleged in the complaint were sufficient to lead a three-judge Superior Court panel to find that the shooting was accidental, and that Erie needed to provide coverage. The panel noted that Carly alleged McCutcheon had been “screaming, swearing, incoherent and acting ‘crazy,’” and that during the altercation, McCutcheon “tossed” up his arm that held the gun, “thereby recklessly shooting off various rounds in and about the room,” one of which hit Carly.

Because Carly alleged that the shooting was accidental, the panel determined it fit the definition of “occurrence” in the homeowner’s policy that McCutcheon had through Erie, which defined an occurrence as “an accident including continuous or repeated exposure to the same general harmful conditions.”

Chief Justice Thomas Saylor, however, said Carly would need to argue that McCutcheon did not intend any harm to come when he engaged in “mutual combat” with Carly while he had a gun in his hand.

Meghan Finnerty of Offit Kurman, who is representing Carly, told the justices that they needed to view the initial intentional acts, including McCutcheon allegedly pulling Carly into the house, as separate from the shooting incident. Viewed that way, the complaint, Finnerty contended, clearly showed that the shooting was accidental. 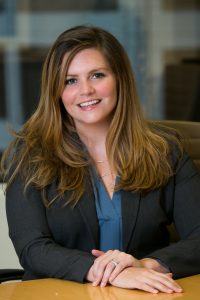 “The only intentional act was when he was pulled in off the porch,” Finnerty said. Saylor also questioned Finnerty how, as a practical matter, carriers would be able to factor in these risks when writing policies, but Finnerty replied that carriers already provide enhancements in policies for accidental shootings. “Erie could have used one of these exclusions and they didn’t,” she said.

“The only intentional act was when he was pulled in off the porch,” Finnerty said.

Saylor also questioned Finnerty how, as a practical matter, carriers would be able to factor in these risks when writing policies, but Finnerty replied that carriers already provide enhancements in policies for accidental shootings.

“Erie could have used one of these exclusions and they didn’t,” she said.

Reprinted with permission from the April 2019 issue of The Legal Inteligencer. © 2019 ALM Media Properties, LLC. Further duplication without permission is prohibited. All rights reserved.

Ms. Finnerty is a commercial litigator with a varied practice, with an emphasis on assisting corporate and nonprofit policyholders as they navigate disputes with their insurance companies. Ms. Finnerty also has significant experience assisting companies in products liability and construction accident litigation. She has represented companies in fields such as energy, finance, construction, manufacturing and retail in commercial litigation disputes, and regularly serves as a sounding board for manufacturing clients on a wide variety of legal issues including, insurance losses, risk management, contractual indemnity, employee theft and collection issues.