Published in the Legal Intelligencer 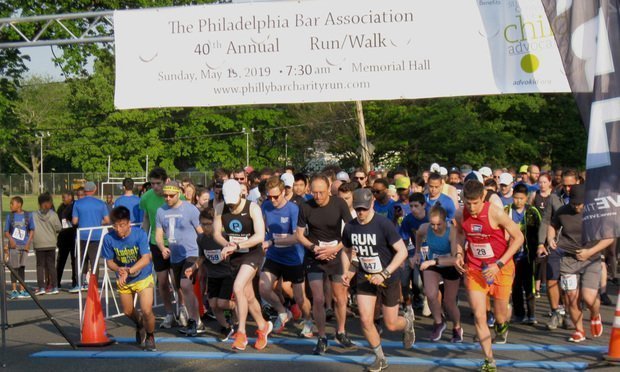 June 20, 2019 | Philadelphia, PA On May 19, the 40th annual Philadelphia Bar Association 5K Charity Run took place at Memorial Hall, Fairmount Park in Philadelphia. The 5K race was supplemented not only by a 5K walk and a Kid’s Dash, but also by a 10K race, which was the only race that was run by the bar association for the first 15 years of the event. We could not have asked for a better day to bring back the 10K run. At the start of the race at 7:30 a.m., the temperature was 60 degrees. The 5K run and walk started 15 minutes later and both races ran well on the portion of Fairmount Park surrounding Memorial Hall. This 40th annual event, which benefits the Support Center for Child Advocates, also welcomed, at no charge, more than 600 children from the charity Students Run Philly Style.

In addition, children 10 years and under enjoyed a Kids’ Dash sponsored by Buchanan Ingersoll & Rooney, under the organization of partner Marc Tepper.

In the Caesar Rivise 10K Legal Team Competition, Morgan Lewis saw two of its teams tied for first place. Overall, Morgan Lewis was led by Will McEnroe who recorded the fastest time in the 10K legal competition, Ben Cardonick, Octavia Litvinov and Richard Kane, all of whom came in first place in their respective age group.

Special thanks to the vice chancellor of the bar, retired Judge Michael Snyder, who attended the race, and a huge congratulations to Jeffrey Kall, who completed the Bar Charity Run for the 40th time.

Once again, the race was supported by the Philadelphia Bar Association and was joined by the following corporate-level sponsors: Buchanan Ingersoll, Caesar Rivise, Firstrust Bank, Philadelphia Runner, The Legal Intelligencer, Veritext and USI Affinity.

In addition to the revenue raised by the sponsors and supporters of the race, a most substantial contribution to the race was received from the volunteers that worked tirelessly from 5 a.m. through the end of the race to make the event a success, which was topped off with refreshments donated by Wawa, Firstrust and the sponsors of the race.

Co-director Eric Marzluf made his usual incredible contribution coordinating registration, number pickup, T-shirt handouts and refreshment pick-up. Tom Bell, who has been co-director and board member for the past 40 years, worked tirelessly getting the water tables out and handing out water. In addition, the following board members of the race committee also contributed: namely, Marc Tepper of Buchanan Ingersoll, who will succeed Marzluf and me as the director of the 2020 Philadelphia Bar Charity Run; Frank Cervone, Moira Mulroney and Mike Drzik from the Support Center for Child Advocates; Magdalena Lozada of Caesar Rivise, who oversaw the team competition and handled all of the secretarial work for the race; Todd Strauss of SVE Timing–Mid-Atlantic, who laid out the race courses and timed the event; Wendi Platt of Virgo III, who brings the bagels and other snacks every year for the volunteers; and Iesha Nelson of Students Run Philly Style and Ernie Holtzheimer, all of whom worked to make the run a success for the 40th time.

I want to thank everyone involved at the Philadelphia Bar Association and the Support Center for Child Advocates who allowed me the great pleasure and honor of being the director or co-director of this event for the past 40 years.

Reprinted with permission from the June 07, 2019 issue of The Legal Intelligencer. © 2019 ALM Media Properties, LLC. Further duplication without permission is prohibited. All rights reserved.