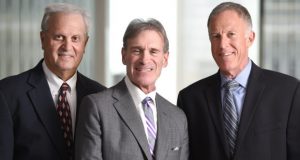 Maple Lawn-based Offit Kurman’s latest acquisition is part of a larger effort to expand into a regional firm with 200 lawyers by 2020. Thirty full-time lawyers for the firm will be based in New York City with the Salon Marrow addition. The firm had just two lawyers in that office at the beginning of the year.

Earlier this year, Offit Kurman made its first moves in Manhattan by absorbing Eaton & Van Winkle and then Menaker & Herrmann.

Salon Marrow’s style and culture meshes well with Offit Kurman, according to the latter firm’s CEO and chairman, Ted Offit.

“There was an instant connection between our two firms,” he said in a statement. “In many respects, Salon Marrow very much resembles the way Offit Kurman looked when we had 10 lawyers.”

Offit Kurman has more than 170 attorneys across 12 offices in the Mid-Atlantic. While the firm’s initial plan was to have as many as 50 attorneys in New York, Offit Kurman is looking at a larger presence in the region including in New Jersey, Westchester County, Long Island and Connecticut.

“We’re not done yet,” Offit said. “The plan is not simply to be a Manhattan firm, but a firm with a New York regional presence.”

Click here to read the full article on The Daily Record.

Offit Kurman is one of the fastest-growing, full-service law firms in the Mid-Atlantic region. With over 170 attorneys offering a comprehensive range of services in virtually every legal category, the firm is well positioned to meet the needs of dynamic businesses and the people who own and operate them. Our twelve offices serve individual and corporate clients in the Maryland, Delaware, New Jersey, and Northern Virginia markets, as well as the Washington DC, Baltimore, Philadelphia, and New York City metropolitan areas. At Offit Kurman, we are our clients’ most trusted legal advisors, professionals who help maximize and protect business value and personal wealth. In every interaction, we consistently maintain our clients’ confidence by remaining focused on furthering their objectives and achieving their goals in an efficient manner. Trust, knowledge, confidence—in a partner, that’s perfect.