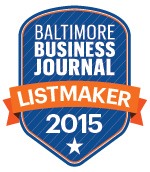 The Baltimore Business Journal has once again included Offit Kurman in its annual list of regional law firms. The 2015 list catalogs the region’s top performing firms, as determined by the number of lawyers working for each. Offit Kurman is ranked number 15 out of 50. This honor marks 7 years since Offit Kurman was first named to the list, back in 2008. Since then, the firm has maintained its standing in the upper echelons of the ranking, demonstrating a trend of sustained growth in the Baltimore area. Offit Kurman continues to develop and expand its services and repertoire of legal talent throughout Maryland, as well as in surrounding states such as Pennsylvania, Virginia, and Delaware. Last year, the firm employed its 100th attorney. More practitioners continue to join the team at a regular pace. Now networked across eight offices in the Mid-Atlantic region, Offit Kurman is able to offer a comprehensive suite of legal services including business law and litigation, labor and employment, Estate planning and asset protection, family law, real estate counsel, government contracting, cybersecurity, and more.

“For Offit Kurman, 2014 was a banner year,” said Howard Kurman, co-founder and Managing Partner of the firm. “If current trends are any indication, 2015 promises to be even more significant. I thank everyone who has joined us in this journey, and look forward to the new faces and opportunities this year will bring.” Baltimore Business Journal subscribers can find the full list of Baltimore’s law firms in the publication’s January 2015 issue.

Offit Kurman is one of the fastest-growing, full-service law firms in the Mid-Atlantic region. With over 100 attorneys in seven offices serving Washington DC, Baltimore, Philadelphia, Wilmington and Northern Virginia, the firm is well positioned to meet the legal needs of dynamic businesses and the people who own and operate them. At Offit Kurman, we are our clients’ most trusted legal advisors, the professionals who help them to maximize and protect their business value and individual wealth. In every interaction, we consistently maintain our clients’ trust and confidence by remaining focused on their objectives to help them achieve their goals. You can also connect with Offit Kurman via Facebook, Twitter, Google+, YouTube, and LinkedIn. WASHINGTON | BALTIMORE | FREDERICK | PHILADELPHIA | WILMINGTON | VIRGINIA