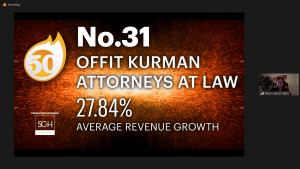 Offit Kurman has been ranked as one of the 50 fastest-growing companies on Baltimore’s “Fast 50” list – an annual ranking of locally headquartered private companies by average revenue growth – for the second consecutive year, according to the Baltimore Business Journal. Each year, the Journal publishes the Fast 50 to honor the top companies in the region, demonstrating consistent rates of rapid growth. For this year's list, ranked companies were recognized for having the highest average percent change in revenue in the three-year span from 2017 to 2019.

To be eligible, companies had to have revenue of at least $100,000 in 2017 and $1 million in 2019, have to be headquartered in Greater Baltimore, and also had to record consecutive growth each year. The Baltimore Business Journal partnered with SC&H Group Inc. to verify the revenue numbers at each company to ensure the results.

Offit Kurman had grown approximately 27.84% average revenue growth in the past three years through strategic affiliations in Greater Baltimore and surrounding markets. In 2017 and 2019, the firm significantly expanded its presence in New York City, adding dozens of attorneys and opening a new office in Midtown Manhattan, and most recently, Charlotte, North Carolina. Offit Kurman continues to grow in Pennsylvania, Virginia, D.C., and its home base in Maryland by affiliating with experienced legal professionals.

For more information about Offit Kurman, including news of the firm’s recent growth, visit offitkurman.com.