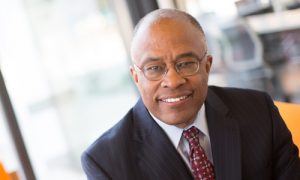 Baltimore, MD | September 20, 2016  Offit Kurman is launching a Diversity Speaker Series and is proud to welcome a prominent Baltimore community leader for the firm’s first event in the series. This November, Offit Kurman will host Kurt Schmoke, President of the University of Baltimore, for an invitation-only presentation and discussion.

President Schmoke, who served as Mayor of the City of Baltimore for twelve years, was the first African-American elected to the office. Throughout his extensive career advocating for education, fair housing, economic development, and civil rights, he established himself as a leader in public service as well as higher education environments. During his tenure as Mayor, he received a national Literacy Award from President George H.W. Bush, and President Bill Clinton designated Baltimore an Empowerment Zone in recognition of the city’s housing and economic development initiatives. Following his political career, President Schmoke served as the Dean of the Howard University School of Law, in addition to general counsel and provost for the institution thereafter.

At Offit Kurman’s first Diversity Speaker Series event this November, President Schmoke will facilitate an open discussion about building a culture that fosters respect for diverse populations in the community. He will speak about lessons learned from Baltimore’s civil unrest, exploring opportunities to nurture increased cooperation, communication, and understanding in the city and surrounding region. President Schmoke will also address the role of partnerships between academia and businesses in promoting career development and education in Baltimore.

“We are honored to have such an inspirational guest speaker to launch our Diversity Speaker Series,” said Howard Kurman, Founder of Offit Kurman and member of the firm’s Diversity Committee. “President Schmoke not only possesses extraordinary expertise in the fields of education, law, and public policy; he is a powerful speaker and, moreover, a Baltimore icon. Over the years, President Schmoke has demonstrated an unwavering commitment to education and opportunities for all populations and communities, and we are excited to hear him speak to our attorneys and guests.

Space at Offit Kurman’s Diversity Speaker Series is limited and open by invitation only. If you are interested in attending this event, please contact Michele Correnti at mcorrenti@offitkurman.com for more details.