Offit Kurman Featured in I95 Business 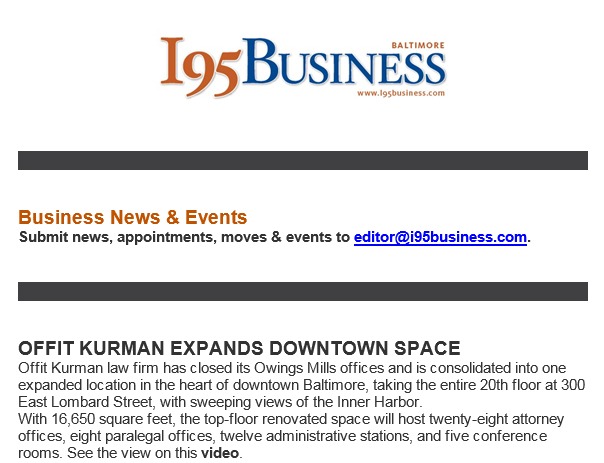 Offit Kurman is one of the fastest-growing, full-service law firms in the Mid-Atlantic region. With over 100 attorneys in seven offices serving Washington DC, Baltimore, Philadelphia, Wilmington and Northern Virginia, the firm is well positioned to meet the legal needs of dynamic businesses and the people who own and operate them. At Offit Kurman, we are our clients’ most trusted legal advisors, the professionals who help them to maximize and protect their business value and individual wealth. In every interaction, we consistently maintain our clients’ trust and confidence by remaining focused on their objectives to help them achieve their goals. You can connect with Offit Kurman via Facebook, Twitter, Google+, YouTube, and LinkedIn. WASHINGTON | BALTIMORE | FREDERICK | PHILADELPHIA | WILMINGTON | VIRGINIA | NEW YORK