Philadelphia, PA | February 14, 2018 Offit Kurman client KieranTimberlake, LLC, a nationally preeminent architecture firm based in Philadelphia, has completed its work on the new US Embassy in London. The embassy is open for business and is slated for a formal ribbon-cutting ceremony in the near future.

“I am extremely impressed with, but not surprised by, the quality, innovation and beauty of this incredible project,” said Offit Kurman shareholder and managing partner of the Philadelphia office Herb Fineburg. “Stephen Kieran and James Timberlake are visionaries and preeminent American architects that will be remembered for years to come among the ranks of Frank Lloyd Wright and Eero Saarinen.” 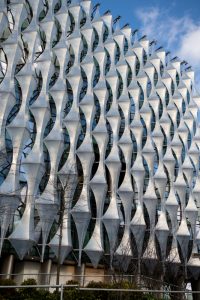 The 12-story, 210-foot-tall building, which the firm describes as a “transparent crystalline cube,” cost approximately £750 million ($1.04 billion) to construct. It was designed to reflect the values of “transparency, openness, and equality,” while meeting rigorous security and sustainability standards. The building is a remarkable example of the use of structural glass for which KieranTimberlake is widely known.  Other notable features include a reflective facade that minimizes glare and solar radiation absorption (making the building a net-energy exporter), indoor gardens, curving walkways, and flexible work spaces. The surrounding landscape and 100-foot moat provide public green space that also protects the building and its occupants.  Its location in the Nine Elms district, anchors a redevelopment boom for the area, which overlooks the River Thames.

KieranTimberlake won a competition to design the building in 2010, and construction began in 2013. The new embassy succeeds the one located at the London Chancery Building on Grosvenor Square, which was designed by famed modernist architect Eero Saarinen, and opened in 1960.

Architects Stephen Kieran and James Timberlake founded KieranTimberlake in 1984. In the years since, the firm has earned global prestige for its forward-thinking, environmentally sustainable designs. KieranTimberlake has developed and renewed buildings for institutions such as Harvard, Yale, New York University, Penn State, Wellesley College, the University of North Carolina at Charlotte, and the James A. Michener Art Museum. Other projects have included Philadelphia’s Dilworth Park and the master plan for the land along the central Delaware River.

The firm is also recognized for its proprietary advancements in prefabricated architecture and building materials, including SmartWrap™: a lightweight, energy-generating, paper-thin envelope that can be wrapped around the structural frame of a building. A prototype of their innovative “cellophane house” was installed at the Museum of Modern Art in New York in 2008.

For more information about the new US Embassy in London, click here. To get in touch with Mr. Fineburg and Mr. Noyes, and to learn more about Offit Kurman’s comprehensive legal services, visit offitkurman.com.