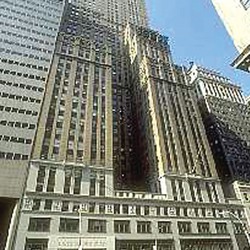 New York, NY | Mar 16, 2015 Offit Kurman has opened a new office location in New York City. Located in the heart of Midtown Manhattan, the office occupies the 51st floor of One Grand Central Place, a historic skyscraper overlooking Grand Central Terminal. Financial institutions regulatory attorney Daniella Casseres will spearhead the expansion. The New York City office is Offit Kurman’s ninth location, and the firm’s first in the state of New York. Situated mere blocks from travel hubs such as Grand Central Station, Penn Station, and the New York Port Authority, the office offers convenient access for local clients. Office visitors can also enjoy the numerous accommodations, eateries, and sites of interest in the vicinity. Nearby city landmarks include the Chrysler Building, the Empire State Building, Rockefeller Center, Bryant Park, and the New York Public Library; as well as shops and destinations along Broadway, 5th Avenue, Madison Avenue, and Times Square. Though still it in its early stages, the New York office constitutes a significant milestone for Offit Kurman. Acting as the firm’s base of operations for the New York/New Jersey metropolitan area, the location will offer Offit Kurman’s brand of comprehensive legal services, with particular focus on labor and employment law and financial institutions regulatory practices. Daniella Casseres will relocate from Offit Kurman’s Bethesda, MD office to take on a leading role at the New York location. An up-and-coming associate with the firm, Ms. Casseres boasts an accomplished resume, with prior experience regulating large and complex banking institutions for the Federal Reserve Bank of Chicago, and a position at the U.S. Commodity Futures Trading Commission. She also advises Offit Kurman’s affiliate company, Strategic Compliance Partners (SCP), which provides consulting and monitoring services for the mortgage banking industry. “This is landmark moment in our history,” said Ted Offit, co-founder and managing principal of Offit Kurman. “Having an office in New York City is a dream for any major law firm, and this opportunity couldn’t have come at a better time for us. With a team of over a hundred legal professionals in our ranks, Offit Kurman is more than ready to assume our place on 42nd Street. New York, here we come.” Directions to Offit Kurman’s New York City office are available on the firm’s website, where visitors can also find information about Offit Kurman’s other locations, along with the latest legal news and opinion written by attorneys.

Offit Kurman is one of the fastest-growing, full-service law firms in the Mid-Atlantic region. With over 100 attorneys in seven offices serving Washington DC, Baltimore, Philadelphia, Wilmington and Northern Virginia, the firm is well positioned to meet the legal needs of dynamic businesses and the people who own and operate them. At Offit Kurman, we are our clients’ most trusted legal advisors, the professionals who help them to maximize and protect their business value and individual wealth. In every interaction, we consistently maintain our clients’ trust and confidence by remaining focused on their objectives to help them achieve their goals. You can connect with Offit Kurman via Facebook, Twitter, Google+, YouTube, and LinkedIn. WASHINGTON | BALTIMORE | FREDERICK | PHILADELPHIA | WILMINGTON | VIRGINIA