You are invited to join us for our monthly Veteran networking breakfast. This networking event is a forum for military Veterans in business and those who support them, or wish to team with them, to meet and connect. For those unfamiliar with ORP, I encourage you to read this article and visit our website. 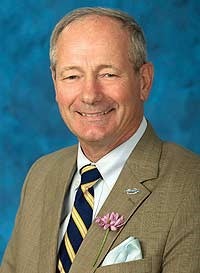 April will be a very special event commemorating the 40th Anniversary of the end of the Vietnam War.  We are honored to have as our speaker Mr. Frederick Downs, Jr.  Mr. Downs is a decorated Vietnam Veteran who served in the U.S. Army from 1966 to 1969. He was a Second Lieutenant Platoon Leader in Vietnam. Severely wounded in combat, he lost his left arm above the elbow. He was decorated with the Silver Star, Bronze Star with “V” device for Valor, the Vietnam Gold Cross of Gallantry, the Combat Infantryman’s Badge, and four Purple Hearts. After the war, Mr. Downs continued his public service.  He is retired from the Veterans Administration as the Senior Executive Service (SES) Chief Procurement and Logistics Officer where he managed the national 13 billion dollar Veterans Health Administration’s Procurement and Logistics Program. He had also served as the Chief Consultant of the Prosthetic and Sensory Aids Service for the VA. In addition to his VA duties Mr. Downs has worked on special assignments for the Department of Defense (DoD) and the State Department Agency for International Development (AID) to develop prosthetic projects in areas of civil conflict.  From 1987 to 1992, he was a key member of the humanitarian team established by General John W. Vessey, Jr. Presidential Envoy to Vietnam on POW/MIA Affairs. Mr. Downs is the author of three critically acclaimed books published by W.W. Norton and Company – The Killing Zone:  My Life in the Vietnam War: Aftermath: A Soldier’s Return from Vietnam: and No Longer Enemies, Not Yet Friends.  He has written articles for the Washington Post, New York Times, and other publications.  Mr. Downs is a member of the Screen Actors Guild and has appeared on numerous T.V. shows as a subject matter expert in Prosthetics and in movies.  He has lectured at West Point many times on the subject of Leadership in Combat. Come out and join us in celebrating and honoring this generation of warriors who served during a time when their service wasn’t appreciated and respected the way it should have been.  Most importantly, don’t pass up this opportunity to network with other Veterans focused on success in business. If you are a company looking for a VOSB or SDVOSB to team with there is no better place to find qualified Veteran owned businesses than at ORP.