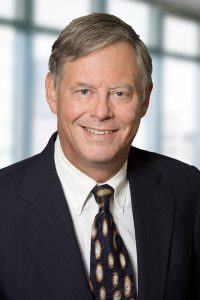 The Maryland State Bar Association (MSBA) has awarded its James J. Hanks, Jr. Lifetime Achievement Award to Offit Kurman Principal John “Jack”Orrick. The annual award, presented by the MSBA Section of Business Law every year since 2008, is given to an attorney whose lifetime achievements have contributed to the practice of business law.

Jack Orrick has been a member in the MSBA’s Section of Business Law since 1982. He has served as a member of the Business Section Council since 2002 and as its chair from 2009-2010.  During his term, he successfully lobbied for integration of MICPEL’s (Maryland Institute for Continuing Legal Education for Lawyers) CLE functions into MSBA after MICPEL claimed insolvency and, as vice chair, he reinstated the  Advanced Business Law Institute, offering continuing business law legal education for Maryland lawyers. Mr. Orrick has also served on drafting committees for legislative amendments to the Maryland Limited Liability Company Act, the committee for the 2007 Maryland Report on Lawyer’s Opinions in Business Transactions and currently serves on the Budget and Finance Committee and the CLE Committee of MSBA. He has also served on the organization’s Board of Governors (2010-2012 and 2014-2016).

Jack Orrick provides counsel on a broad range of commercial transactions.  He focuses his practice on corporate matters, joint venture formations and business and tax planning. He also represents clients in securitized equity and debt financings.  A respected leader in the industry, he is a frequent speaker and writer on topics related to deal structuring and financing and an active participant in numerous national and regional business and charity organizations.