Herbert R. Fineburg Elected to Offit Kurman Board of Directors 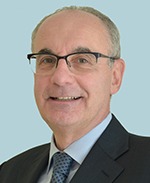 Philadelphia, PA | April 12, 2016  Herbert R. Fineburg, a firm shareholder and co-managing principal of the firm’s Philadelphia office, has been elected to the Offit Kurman, P.A. nine-member board of directors where he will sit on the Governing Board. As the firm continues to grow its Philadelphia office and recent announcements of significant commitment to the Philadelphia, New Jersey, Delaware, and New York markets the addition of Mr. Fineburg as a board member furthers that goal. In October 2013, Mr. Fineburg, along with 11 other attorneys, paralegals and staff from his prior law office he founded in 1993, joined Offit Kurman as part of Offit Kurman’s expansion plan north of Maryland.  Since Mr. Fineburg joined Offit Kurman, the law firm has also opened offices in Harrisburg, PA; Woodbridge, NJ; Wilmington, DE; and New York City.  Offit Kurman is a fast growing law firm in the mid-Atlantic region with over 120 lawyers including 25 lawyers in its Philadelphia office. Ted Offit, co-founder and managing principal, stated: “We have been extremely successful growing our firm throughout the mid-Atlantic region. The steady growth in Philadelphia through New York has been instrumental in that process. We are thrilled to announce the addition of HerbFineburg as a member of our growing board so he can continue to be an integral part of our commitment to making Offit Kurman, P.A. a growing and thriving law firm.” Mr. Fineburg, with an LL.M. in Taxation from the New York University School of Law, focuses his law practice on tax, business law, and estates & trusts matters. Utilizing his varied practice, his many years as an attorney and experience as a managing partner, Mr. Fineburg will continue to contribute further as a member of the board of directors of Offit Kurman, P.A. “I am excited to enhance my involvement with the firm and I am pleased with the immense growth in the Philadelphia office. As an active board member, I plan on being far more involved in fostering further progress and advancements in the mid-Atlantic region. We are a quality firm and a name to be well-regarded,” stated Mr. Fineburg. Offit Kurman has a full-service practice in its Philadelphia office, including attorneys focusing on litigation, intellectual property, M&A transaction, bank financing, labor law, and municipal law to name a few.

Offit Kurman is one of the fastest-growing, full-service law firms in the Mid-Atlantic region. With over 120 attorneys offering a comprehensive range of services in virtually every legal category, the firm is well positioned to meet the needs of dynamic businesses and the people who own and operate them. Our ten offices in the Mid-Atlantic region serve clients in the entire state of Maryland, the Washington DC metropolitan area, Northern Virginia, Philadelphia, Harrisburg, Delaware, New Jersey, and New York City.  At Offit Kurman, we are our clients’ most trusted legal advisors, professionals who help maximize and protect business value and personal wealth. In every interaction, we consistently maintain our client’s confidence by remaining focused on furthering their objectives and achieving their goals in an efficient manner. Trust, knowledge, confidence—in a partner, that’s perfect. You can connect with Offit Kurman via our Blog, Facebook, Twitter, Google+, YouTube, and LinkedIn pages.  You can also sign up to received Law Matters, Offit Kurman’s monthly newsletter covering a diverse selection of legal and corporate thought leadership content.