By Wendy Saltzman, 6abc
State regulators have announced the first round of 12 marijuana grow operations, and 27 entities that have been selected to operate dispensaries under Pennsylvania's medical marijuana law, a program expected to be up and running next year.

But that announcement left many applicants fuming, with some crying foul.

So we're investigating exactly how the state picked the winners and the losers.

One approved grower has ties to the governor, another one just north of the Philly area is affiliated with a company accused of illegally transporting cannabis across state lines.

Pennsylvania Cannabis Advocate Geoff Whaling, of Bunker Botanicals, is one of 177 applicants who paid $10,000 a piece - for an overall total of $1.77 million to the state - for a shot at earning a massive money-making marijuana grow license.

"It is probably a million dollars a month that we would be generating out of this facility," Whaling said.

Bunker Botanicals includes all-Pennsylvania engineers, investors, and board members, but failed to get the thumbs up to grow in their underground facility.

Former Flyers Forward Riley Cote is a board member.

"There's always concern for, I don't know if ethics is the right word, but, you know, some shady business going on," Cote said.

Companies like Bunker can appeal the decision amid concerns about how permits were doled out. It's big money, and some companies shelled out upwards of $60,000 for a piece of the marijuana pie.

The reason Pennsylvania is potentially such a gold mine for marijuana growers is the state has approved medicinal use for 17 qualifying disorders. That is significantly more than any other state.

But what's concerning, according to Attorney Joe Kelley, is how the applicants were scored, and whether the process was potentially tainted.

For example: the Chairman of Berks County's Franklin Labs - which obtained one of the licenses - is Governor Tom Wolf's former Secretary of Policy and Planning, John Hanger.

Prime Wellness of Pennsylvania, another entity approved for a permit, lists Chase Lenfest, son of philanthropist Gerry Lenfest, as a principal and financial backer.

Click here to read the full article on 6abc.com 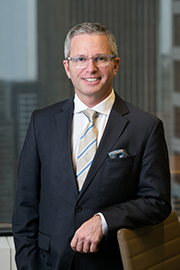 For 20 years Mr. Kelley has focused his practice on health care and privacy.  He chairs Offit Kurman’s Privacy and Data Protection Practice Group and helped to found the firm’s Health Care Practice Group.  He counsels clients on all health, privacy and security, technology, and cannabis industries and serves as general counsel to businesses in the health care, cybersecurity, and medical cannabis sectors.