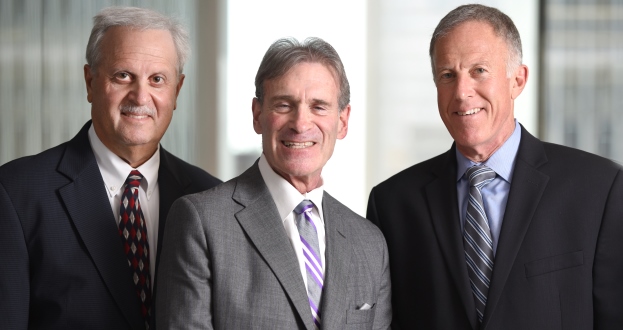 ‘One of the reasons we’re able to grow is that we have been a risk-taking firm in a risk-averse marketplace,’ says Ted Offit, right, of Offit Kurman. Offit, his brother, Maurice, left, and Howard Kurman, center, formed their firm 30 years ago. (Maximilian Franz/The Daily Record)

Offit Kurman started out 30 years ago as a small Baltimore law firm founded by brothers Maurice and Ted Offit and their childhood friend, Howard Kurman. The trio had a desire to think bigger and expand across state lines, and now Fulton-based Offit Kurman has 140 lawyers from New York City to Tysons Corner, with plans to have 200 attorneys by 2020.

“I always thought that one of the keys of our success is that it didn’t take us long to interact as partners because we had known each other for so long,” said Maurice Offit. “Any issues that partners usually have in a law firm, we had worked out long before.”

“We had similar objectives and goals,” added Kurman, “which was even more important in terms of wanting to grow a small, suburban firm into a regional firm. That didn’t come at first, but it came over time and it has continued to this day.”

As the firm celebrates its 30th anniversary, the three founding partners sat down with The Daily Record to talk about the firm’s growth, the lessons they’ve learned along the way and the state of the practice of law. The interview has been edited and condensed for clarity and space.

Why did you want to become a regional firm?

Maurice Offit: It happened almost by accident. We were a Baltimore firm – all of us were born and raised in Baltimore – and then our office was in Owings Mills. We had gotten to the point where the firm had gotten too large for the Owings Mills office. We had a choice to make. One was to relocate to a larger Baltimore County locale, or the other was to start to branch out and go into other parts of Maryland. We decided to branch out. It was one of the best decisions we ever made.

Could you have survived if you didn’t branch out?

Howard Kurman: I think we could’ve, but one of the premises behind our growth plan was that we wanted to have depth in all of the service areas that a privately held business or families of wealth would need. It’s very difficult in today’s legal market to be very small or of constricted size because the concept of being a one-stop shop for your clients becomes harder the smaller that you are. Frankly, I think the future of the legal market is not in the small firm, unless it’s a niche-oriented (or) boutique.

Ted Offit: In order to have a plan, you have to have goals and metrics that are tied to the clients. We had a growth plan; it was a regional growth plan. We decided to grow at a 10 percent growth rate. When we extrapolated the numbers, (it) came to a 200-person target.

What is the process behind building a firm with 200 attorneys?

"We’re looking to recruit two kinds of attorneys. One would be an attorney that provides us with depth to an existing practice. The other is an attorney that provides us with scope into new areas of practice or new geographical areas. The Offit Kurman way is to be entrepreneurial and to concentrate on business development and to take advantage of the firm’s marketing footprint."