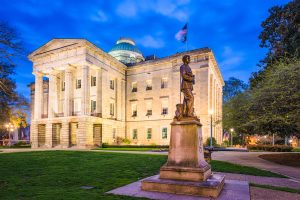 The NC Court of Appeals, in a published opinion (i.e., the opinion is binding precedent), got egg on its face in the case of Bryan v. Kittinger. The Court begins its opinion by citing a New York case: “The issue is, what is chicken?”

The Kittingers and the Bryans are next-door neighbors in the 16-lot Sleepy Hollow subdivision in Granville County. The Kittengers kept four hens in a chicken coop, which ruffled the Bryans’ feathers.

Sleepy Hollow is subject to restrictive covenants recorded in 1998, which state that “No animals, livestock or poultry of any kind shall be raised, bred or kept . . . Except that dogs, cats or other household pets may be kept, provided they are not bred or maintained for any commercial purpose.” The Bryans, unhappy with their feathered neighbors, sued to have the hens removed. During the pending lawsuit, 11 owners (i.e., 68%) in Sleepy Hollow agreed to amend the restrictive covenants to allow owners to have up to five chickens. Nevertheless, the trial court found in favor of the Bryans, requiring the Kittingers to remove their hens.

The Kittengers appealed. The Court of Appeals, citing a notorious North Carolina case, Steiner vs. Woodrow Estates, noted that restrictive covenants which prohibited “livestock” were unenforceable against Nigerian dwarf goats since the goats were the Steiners’ “household pets.” The Court of Appeals, relying on Steiner, held that the trial court should have considered whether the Kittengers’ hens were household pets before making its determination and, therefore, further fact-finding was necessary in the trial court.

Here’s where the court lays an egg. The Kittengers raised the 2020 amendment – which allows owners to keep up to five hens – as grounds to allow them to keep their chickens. In their arguments to the Court, the Kittengers point out that the Planned Community Act says that amendments are “presumed valid” if agreed by 67% or more of lot owners within a planned community.

Interestingly, none of the parties cite the North Carolina Nonprofit Corporation Act, which governs all planned communities and says that when a membership is comprised of multiple owners (as in the case of marital property. . .), then one owner’s vote can bind the remaining owners.

While it appears the intent of the Planned Community Act and the Nonprofit Corporation Act is to allow one spouse to vote (including a vote by written agreement) –  the Court’s opinion does not align with the intent of either Act.

But I haven’t even cracked the shell yet: Sleepy Hollow subdivision is not subject to the Planned Community Act!

This case is a binding precedent, and HOA votes by written agreement must be agreed upon by both spouses. We hope that the case is appealed or overturned since it creates only confusion for the flocks of HOAs relying on clear guidance from our courts.