Sexting and Your Divorce: Playing With Fire? 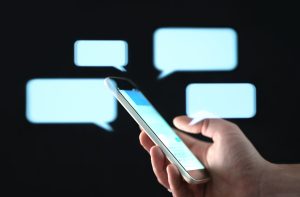 Let’s face it; technology is now a part of almost every facet of our lives, even our romantic lives. Therefore, more and more often, the topic of “sexting” (the sharing of graphic or intimate photos via text message, iMessage, and email) is an issue we deal with in Family Court. Clients want to know if it’s ever “okay” to engage in such romantic or flirtatious behavior with a new love interest – particularly when both spouses have made the decision to leave the marriage and no longer feel romantically towards each other.

The important question, however, is whether such behavior, if discovered by your spouse, will affect the outcome of your divorce or child custody case in South Carolina. Many family law clients have lived in emotionally and physically unsatisfying relationships for a very long time, and the temptation to have those needs met by a new and willing partner, even before a divorce is finalized, can be very tempting.

Studies have shown over and over that spouses in marriages often have very different definitions of “infidelity” or “cheating.” In particular, emotional infidelity revealed some of the biggest differences in opinion, typically based upon the gender of the spouse. Typically, about 77% of women say that emotional relationships does qualify as cheating, while only 55% of men felt the same way.

Online relationships, a relatively modern category of infidelity, also reveal a large difference in the way they are perceived by men and women. Only 56% of men believe online flirting or texting counts as cheating, while 82% of their female counterparts think it does. Our professional experience has shown, however, that when texting changes to ‘sexting’, there is much more equality among the genders that these actions constitute a form of cheating on the marriage.

How Will the Family Court Handle These Cases?

The big question is whether sexting going to be considered “adultery” under the law in South Carolina? Adultery in South Carolina remains one of only a few fault-based grounds for divorce. So, does adultery only exist legally when there has been sexual intercourse? The short answer is no, not according to some South Carolina court decisions. Though there is no ironclad rule regarding which behaviors specifically qualify as adultery and which behaviors do not, it is clear that sexual relations will almost always meet the test (absent rape or some other non-consensual sexual experience of a spouse).

That being said, our courts have also been clear that adultery in South Carolina is not only sexual contact. Our courts have decided that adultery has been committed in situations where there may have been no actual sexual intercourse at all. Judges across the state have found that sexual intimacy between two non-married partners can be enough to prove adultery in court. If viewed from that perspective, could a court rule one day that sharing photos of intimate acts or intimate parts of the body with anyone other than your spouse could then be considered “adultery”?

Financial Impact of a Finding of Adultery

A finding of adultery in your divorce can have an important financial impact if your case is in South Carolina. First and foremost, a spouse who has committed adultery is forever barred from receiving any alimony or other spousal support. For that reason, claims of adultery might be the biggest and most hotly contested issue in cases where alimony would most likely be paid to the lesser-earning spouse. Put differently, proving that a spouse has committed adultery can mean thousands (or sometimes hundreds of thousands) of dollars saved by the spouse who was the victim of the cheating.

If you want to get a divorce and suspect that your spouse is having an affair, your adultery claims will be handled according to your state’s laws. If you’re in South Carolina, it’s important to contact an experienced family court attorney like Ben Stevens today to discuss your fault-based divorce options. Even if you aren’t in South Carolina, Mr. Stevens is happy to offer referrals to a well-qualified attorney located in your state.

If you find yourself facing the prospect of a separation, divorce, alimony, support, or other financial issues, you need the help of an experienced South Carolina family law attorney to guide you through the difficult process. Ben Stevens is a Fellow in the American Academy of Matrimonial Lawyers and is a Board Certified Family Trial Advocate by the National Board of Trial Advocacy. He has the experience to help guide you through the most complicated family law issues. You are invited to contact our office at (864) 598-9172 or SCFamilyLaw@offitkurman.com to schedule an appointment.