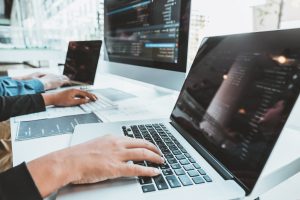 In the United States, so-called “software patents” are among the more difficult to prosecute, in particular, due to the level of scrutiny examiners apply to software-related claims when determining subject matter eligibility. This white paper lists out some basic concepts to consider before devoting resources to applying for a patent covering a software-based invention in the United States.

Software Cannot be Patented in the United States

When I refer to software, I mean source code and object code; i.e., a set of instructions written in a specific language by a human being containing instructions that may be implemented by a computer.

Software is important in these types of inventions because, without it, the process of interest cannot be implemented. Implementation may be enhanced over existing solutions when the software is used within the framework of an improved system architecture. These concepts should be considered together.

Some common questions to ask are:

Be prepared to answer these questions in an illustrative way when evaluating your invention. Most software patents will include similar types of graphics, namely system component drawings, block diagrams showing functions carried out within each component, flow charts representing how the software instructions are executed, and depictions of user interfaces. In the last case, design patents claiming rights in graphical user interfaces – the so-called “GUI patents” – have become more popular in the wake of a $533 million verdict Apple was awarded when Samsung was found to have infringed design patents covering the layout of icons on the iPhone®.

Subject matter eligibility guidance remains lacking in the industry. The USPTO has issued guidance in recent years that appeared helpful when it was released but has been found to lack authority by the Federal Circuit. Nevertheless, the requirements that any invention be new, useful and non-obvious to be patentable remain intact. Therefore, if you are using hardware or implementing processes that are known, you should consider whether your invention as a whole meets these criteria and represents a patentable improvement over the state of the art.

At the outset, software is often used to carry out functions that could be carried out by humans, albeit much less efficiently. A common example is performing mathematical calculations, which is considered an abstract idea and not patentable at the outset. However, if your invention does not implement “well-understood, routine, conventional activity,” you may have something. Examples of such inventions include improving computer functionality, driving a machine that is integral to carrying out a process and transforming an article into something else.

In the parlance of the USPTO guidance, if you have an abstract idea that your software-based invention “is integrated into a practical application that … imposes a meaningful limit on” it, you may have patentable subject matter. Mathematical concepts and methods of organizing human activity, including fundamental economic practices and mental processes implemented by computers, tend to draw the most scrutiny.

In March 2021, when considering the most recent guidance from the USPTO in connection with an argument raised on appeal in cxLoyalty, Inc. v. Maritz Holdings Inc., the Federal Circuit held that USPTO guidance lacks any authority. While courts will consider USPTO guidance, it is not binding, which means you can’t rely on it when evaluating your invention for patentability. Unfortunately, no alternatives to this guidance, which was released in 2019, have been offered.

Software is among the most rapidly developing of all the technologies. As such, software product life cycles may be very short, with new versions and updates being released frequently. In the United States, a patent typically takes 2.5 – 3 years to be granted, and thus if your invention is truly centered on the uniqueness of the software, its value may have come and gone by the time you receive a patent.

Inventions that involve patentable systems or system components and patentable processes or process improvements that will embody a commercial product as the software evolves have the best chance of deriving benefits for your business when protected by patent rights. Therefore, it is important to understand how long the life cycle of your product offering will be when you determine whether your business spends time and money to have a patent that protects your market share. As patent attorneys, we often file continuation and divisional patent applications to cover improvements over core technologies that may represent patentable improvements, but of course, that costs money and takes time. These are economic factors to consider when evaluating your software-based invention.

Software cannot be patented in the United States, but software-based inventions that embody new, useful and nonobvious systems and processes may be. Obtaining one or more patents can be time-consuming and costly, so evaluating the time and cost associated with patent prosecution is important in view of your product life cycles. Therefore, it is always best to consult with a registered patent attorney on strategy before taking the plunge.