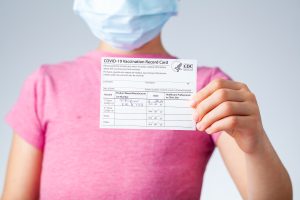 When COVID-19 made its appearance in the United States in early 2020, there was an unprecedented race among pharmaceutical companies to develop a vaccine to protect and fight the coronavirus. Once vaccines were developed and made available, millions of American adults voluntarily became vaccinated. However, not everyone wanted the shot. Many of the “anti-vaxxers” passionately and vehemently oppose the COVID-19 vaccine. The bases for their objection range widely from religious reasons to constitutional challenges to skepticism as to the vaccine’s efficacy to concern that the vaccine may have unintended, dangerous or life-altering side effects.

As of now, whether a person receives the COVID vaccination is a personal choice. When it comes to minors, who decides?

That responsibility falls to their parents or legal custodians. The parents of an intact family share legal custody of their children, meaning that major decisions affecting the health and welfare of the children are made jointly. Neither parent has the “last word” on the legal custody issue and neither parent has veto power over the other parent’s position. Generally, this poses little or no problem in intact families as the parents are usually able to work things out.

If the parents are going through a divorce, then legal custody should be defined and you will need to review the legal document – agreement or court order – for guidance. When parents separate, custody of the children is addressed. “Custody” is comprised of two components: “physical custody”, which designates the “residential” or “ custodial” parent and visitation rights, and “legal custody”, which refers to the legal authority of a parent to make major decisions (as opposed to day-to-day decisions) affecting the children. Legal custody obviously would include making medical decisions and the question of whether the children should be vaccinated with the COVID-19 vaccine should be seen as a major decision, not a day-to-day decision.

After separation, legal custody continues to be shared jointly unless and until the court enters an order for custody or the parties enter into a parenting agreement that states otherwise. Custody orders and parenting agreements can and often do change the legal status and the relationships among separated and divorced parents and their children. If a parent is designated the “primary” or “sole” legal custodian, that parent has the final word in making decisions of lasting importance that affect the child’s welfare and best interests. The parent with sole legal custody may be required to consult with the other parent before making the decision, but would not be required to agree with and adopt the other parent’s recommendations or position on the issue at hand.

Parents can also agree to share the joint legal custody of the children.

The parents can agree to carve out a specific area, feature or element of legal custody, such as the authority to make “health-related decisions”, and grant that authority to one parent while the other parent is vested with the decision making authority over all other matters that fall under legal custody. Also, a court may decide one parent should be the primary legal custodian over health-related matters. That decision should be supported by evidence, such as evidence that during the marriage, that party customarily handled the children’s doctor visits. It is important that the custody order or parenting agreement is carefully drafted by a qualified family law practitioner.

What happens if the parents of a divided family cannot agree between themselves as to whether the children should be vaccinated with the COVID-19 vaccine? How is the conflict resolved?

The answer to that question depends on who has “legal custody”.

These questions are more difficult to answer. Breaking the impasse means someone has to make the decision. Asking the court seems like the logical answer… in fact, the only realistic solution. Given the passion each side of the COVID-19 controversy has demonstrated in the past, expect there to be heated debate and lengthy hearings on not only as to whether the COVID-19 is safe and efficacious but also, should the court rule in favor of vaccination. No doubt, there will be attempts to challenge the court’s decision based on constitutional grounds, such as freedom of religion.

To minimize the possibility of conflict and protracted litigation, the best advice is to make sure your parenting agreement or court order clearly identifies who is the primary legal custodian over health-related matters affecting the children, regardless of whether it is a joint or primary legal custody arrangement.