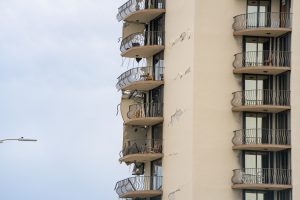 I Know All About Condo Living. After Surfside, Change Is Coming.

Mr. Haber is a lawyer in Florida who is certified by the state bar in condominium law and represents condominium associations. His other practice areas include construction, complex business litigation and real estate law.  This column is reprinted with his permission, and originally appeared in the New York Times on July 29, 2021.

People watched the video of the horrific collapse of a portion of Champlain Towers South in June and asked themselves, “How could this happen, especially in the United States?”

We shouldn’t speculate at this juncture on what caused that tragedy. It is likely to take months, if not years, for experts in forensic engineering to determine the cause or causes of the building collapse.

But we don’t need to wait for that answer to address the broader issues of condominium living that can lead to calamity.

Weaknesses and omissions are evident in state and local laws and regulations governing condominium buildings in Florida and elsewhere. And maintenance issues abound, sometimes exacerbated by the strident politics that can erupt among condominium owners over how they manage their building. Repairs are sometimes delayed or ignored by owners trying to balance their personal financial interests against the complicated and costly preventive maintenance needs of their building – needs that only licensed engineers may fully appreciate. I say this based upon my decades of experience as a lawyer in the field of condominium law.

All of this speaks to an unfortunate reality: For far too long, condominium owners have, in essence, eaten at the table and then left the restaurant, moving on and leaving subsequent owners to pay the bill for delayed maintenance that should have been paid for long ago when the tab was run. That’s why life-safety decisions about structural, fire and electrical issues must always be made by professionals, not members of condo boards.

To understand why, it’s helpful to grasp the politics of condo living. Members of these boards are volunteers; some serve for only one or two years. They often find themselves between a rock and a hard place. If the board sets aside reserve funds for building repairs, they are often criticized and, in some cases, defamed and replaced by new board members less intent on raising maintenance fees or passing special assessments. The general attitude has often been “Why pay today for what you can put off for tomorrow?”

The answer is that putting it off is typically much more expensive, forcing huge special assessments that make owners balk. It also puts them at risk in buildings that might not be safe. These owners are the people making decisions about matters of life safety in condominiums. It is akin to 200 people boarding an airliner and electing five to seven of them to fly the plane, who then ignore or delay acting on the advice of the pilots they have displaced. That’s pure insanity.

What we do know about Champlain Towers South appears to underscore some of those realities. A 2018 engineering report completed in the lead-up to a required Miami-Dade County building recertification warned of major structural concerns, and it recommended actions such as replacing the waterproofing below the pool deck and repairing damage to columns. Despite that report, it took the building’s condo association two and a half years, after much internal strife, to pass a special $15 million assessment. For years, the association did not set aside adequate reserves to address such issues, forcing the large special assessment to pay for them. And the building was clearly underinsured, which will create complicated issues for those with claims for property loss or wrongful death.

Amazingly, only two counties in Florida, Miami-Dade and Broward, require condo buildings to be recertified for structural and electrical systems – and only after 40 years and then each 10 years thereafter.

Because there aren’t enough inspectors or regulators, some buildings have delayed recertification for years. But things can also go wrong before recertification, and at some buildings, owners merely patch and paint and ignore long-term maintenance repairs or otherwise cut corners to avoid the conflict and chaos that large special assessments cause with their neighbors.

What should be done? Recertifications of all life-safety matters concerning structural and electrical building elements should be mandated statewide. The initial building recertification time frame should be reduced from 40 years to 10 or 20 years, and then every five years thereafter, with the inspections performed by licensed engineers or architects with a minimum of five or 10 years of experience. More governmental oversight should be required of remediation work on buildings, ensuring its timely start and completion. Steeper monetary or even criminal penalties should be imposed for noncompliance with the recertification process and required life-safety repairs.

Owners also should be required to provide adequate reserves for all life-safety repairs, and a loophole allowing owners to waive the full funding of reserves should be closed. These funds should always be segregated from other association reserve funds (such as those set aside for decorative purposes in lobbies and hallways).

And building codes, like the Florida Building Code, should require proper waterproofing by competent installers with a minimum warranty of 15 to 20 years. With sea-level rise and the corrosive salt air along the coasts, waterproofing of concrete is as important as brakes are to cars. Concrete is porous, and when water penetrates it, deterioration can occur. If not remediated in the short term, the damage becomes exponentially worse. And huge maintenance fees or special assessments anger residents and hurt market values.

The Surfside collapse was an alarm sounding. Local building officials in South Florida have stepped up emergency structural inspections. Building associations have been frantically trying to hire engineers to provide them with letters attesting to the soundness of their structures. Some older buildings have even been evacuated because of safety concerns.

A recent inspection of a condominium building in Coral Gables, for instance, found potentially serious structural problems. In a statement, the city said that the building’s condo association had “provided a report dating back four years that identified issues. Unfortunately, no action had been taken as prescribed by the report.” The statement added, “Residents of this three story structure were advised that if steps were not taken immediately, the building would need to be evacuated.”

Condominium board members merely have to certify that they have taken a brief course or that they have read the statutes and their association’s governing documents before serving. At a minimum, there should be consideration given to requiring board members to take a more detailed course, which includes the topic of preventive maintenance.

Even the most well-intentioned and fiscally prudent condominium board members may have a hard time envisioning the possibility of a catastrophic building collapse or fire. That’s why we need ethical, licensed and experienced experts making determinations about what repairs are required on a regular basis. If those decisions involve life-safety repairs, the engineers should have the final word.

And how will residents in older buildings pay for needed repairs? Many are on fixed incomes and are unlikely to be able to pay large assessments. One solution would be to create a state or federal loan program that assists banks in making long-term loans to condominiums. Otherwise we’re likely to see more foreclosures on owners who cannot afford to pay these assessments. And that helps no one.

Change is coming. The state bar association has assembled a task force that is now reviewing the adequacy of condominium laws and regulations in Florida and will deliver its recommendations to the governor of Florida and the Legislature.

I also expect reforms and stricter monitoring from the insurance and lending industries. Higher insurance premiums are likely for condominiums, as the risks are now quite evident. Lenders are also likely to scrutinize more carefully insurance limits at condominiums and to require prospective borrowers or the condominium associations themselves to provide information about reserves and engineering reports.

The lessons of the Surfside collapse are clear. Condo boards can no longer be allowed to delay needed building maintenance nor delay life-safety repairs. Those decisions must be put in the hands of experts, who can help steer these boards in a direction that will leave the buildings fiscally sound. All of this will cost money, which will make condo living more expensive – and safer.