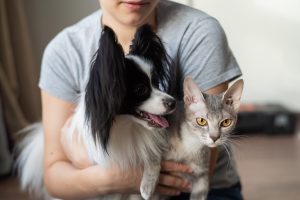 In divorces in Maryland, pets are treated as mere personal property.  In other words, the Court is not going to put a visitation schedule in place for a pet if the parties are unable to agree on who gets the pet.  At most, the Court will determine the value of the pet and perhaps award a certain sum to the party who is not keeping the pet.  I have thankfully never had to have a Court determine ownership or the value of a pet for a client, as my clients are generally able to reach an agreement on the issue.  As the owner of an eleven-year-old rescue dog named Bernice, who cannot manage to get out of the veterinarian’s office for less than $300 a visit, I generally tell clients that the value of a pet is not worth the attorney’s fees of fighting over the pet, if the parties are unable to reach an agreement.  While I love Bernice, she is more of a liability than an asset.

I also know firsthand the emotional connection that you can have with a pet.  In the recent case of Anne Arundel County v. Reeves, 2021 Md. Lexis 259 (Md. Ct. of Appeals June 7, 2021), however, the Court declined a suggestion that the Court re-examine the classification of pets as personal property and treat a pet as something worthy of emotional damages in the case of injury or death.

I first became aware that Maryland has a statute capping damages for the injury or death of a pet as a first-year associate, when the managing partner of my former firm asked me to handle a trial involving a claim of damages to a very old, pure-bred dog.  It was the type of case that older attorneys love to give to first-year associates.  The client was devastated, but the statute capped damages, and the defendant disputed liability.  Half-way through a full-blown trial, my client testified so well regarding her upset that the defendant offered a settlement, which my client accepted.

While the emotional significance of pets has become even more accepted in the twenty years since that shining moment in my legal career, the Reeves case makes clear that Maryland is no closer to changing the legal significance of pets.  In Reeves, the Court held that damages for the shooting death of a pet by a police officer were limited by statute to $7,500 and were limited to compensating for the fair market value of the pet, in the case of the pet’s death, and veterinary bills to care for an injured pet or care of a pet prior to death.  The Court ruled that the statute did not allow for noneconomic damages for the death or injury of a pet, such as pain and suffering.

The Reeves case and the decision not to change the legal standing of pets avoids numerous complications that would arise if the Court had decided otherwise.  An obvious negative consequence that the outcome avoids is increased liability for veterinarians and kennels.  A not so obvious potentially negative outcome would have been the increased complications in divorce cases if a pet is considered something more significant than personal property.  Thankfully at least for family lawyers, if not pet owners, the custody of pets will not be an issue that can be disputed in Maryland divorces.