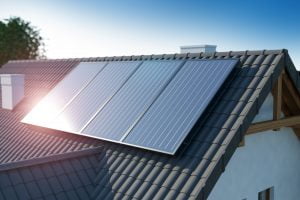 A “hot” topic in HOAs is the extent of an HOA’s authority to regulate solar panels.  The legislature enacted a statute in 2007 that makes deed restrictions (i.e. a Declaration of Covenants, Conditions and Restrictions) void against public policy if they overly restrict an owner’s ability to install solar panels.  The statute is N.C. General Statute § 22B-20 for those interested in reading it.

The courts have never shed light on the scope of the statute since its enactment until the N.C. Court of Appeals decided Belmont Association v. Farwig.  The Farwigs installed solar panels on the front-facing roof of their home without prior architectural approval, and the association found them in violation of the declaration, which limits the type of improvements an owner can install without prior approval.  Since the Belmont declaration did not explicitly refer to “solar panels,” the Farwigs argued that the general restriction against unauthorized improvements could not be enlarged to restrict the placement of solar panels.

Admittedly, the meaning of the statutes is clouded by unusual terminology and strange phraseology, and the court observed that certain parts of the statutes are ambiguous.  The legislative history was convincing in the Court’s determination that the Belmont HOA had the authority to restrict the location of solar panels on the Farwig’s roof.

The Court determined that the legislature intended to prevent restrictions that “have the effect” of prohibiting the installation of solar collectors altogether, but not if the restrictions simply regulate their placement.  As long as the declaration gives an HOA the ability to approve certain types of improvements (here, the Court determined that solar panels are the type of “improvements” that require architectural approval), then the HOA can limit where they can be placed.

The statute specifically says that it does not prohibit restrictions that disallow solar panels “on a roof surface that slopes downward toward” public access, such as a street.  This was evidence that an HOA could prohibit the solar panels on the Farwig’s street-facing roof.

Relying on existing court decisions, the Court further held that restrictive covenants must be enforced reasonably and in good faith by an HOA.  In short, an HOA’s declaration need not specifically use the words “solar panel”.

In a day of appellate opinions that shook the HOA, condominium and real estate world (see our other two blogs on these cases, which are more impactful than Farwig), the Court at least reaffirmed that owners bear responsibility for their own actions.  The Farwig court’s parting message to the Farwigs was that “Defendants installed the solar panels first and sought approval later”, and therefore, their own decisions foreshadowed the outcome.