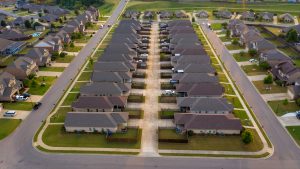 We first blogged about C Investments 2 v. Auger, a potentially impactful case for older communities, several months ago.  The North Carolina Court of Appeals has now rendered its opinion, which is discussed below.

C Investments purchased seven lots in the Country Colony neighborhood in Mecklenburg County.  As is typical with many subdivisions in Charlotte (and in many other cities and towns), the developer of Country Colony in 1952 recorded restrictive covenants to restrict lots to residential-only use, to place restrictions on the type of structures that could be built (“one detached single-family dwelling not to exceed two and one-half stories in height”), on the number of residences that can be placed on a lot, to require homes to meet a minimum square footage, and to require setbacks from property lines.

At issue is the effect of the Marketable Title Act, a law enacted almost 50 years ago to eliminate stale restrictions that impact title to real estate.  Historically, real estate law said that any title defect, encumbrance, or restriction  in an owner’s chain of title is binding on present and future owners.  In part because of the costs required to search real estate titles back to the beginning of real estate recordkeeping, the North Carolina legislature in 1973 enacted the Marketable Title Act.  Despite the MTA’s decades-old dictates, it had never been meaningfully interpreted by the courts.

To oversimplify, the MTA’s goal is to extinguish title restrictions and defects that are more than 30 years old, as long as the defect does not appear in an owner’s chain of title for the past 30 years.

The MTA does have some exceptions.  One of these exceptions is “covenants applicable to a general or uniform scheme of development which restrict the property to residential use only, provided said covenants are otherwise enforceable.”  Such restrictions are not extinguished by the MTA, even if they do not appear in an owner’s chain of title for more than 30 years.

The Court sided with C Investments, holding that the plain language of the statute compelled the Court to determine that the MTA extinguishes all covenants other than the residential use-only restriction.  The Court emphasized that it was not the court’s position to divine what the legislature meant when the language in the statute is plain on its face.

Of particular concern for planned communities  is whether the MTA, after Auger, extinguishes covenants recorded more than 30 years ago.  That said, the subdivision at issue in the Auger case is not subject to the Planned Community Act (Chapter 47F), so this court opinion does not address the interplay between the Planned Community Act and the Marketable Title Act. The PCA has language that says, if it conflicts with other statutes, the PCA controls, and this part of the PCA may protect planned communities formed under the PCA from the record-cleaning mechanism of the Marketable Title Act. (As of the present, this issue has not been addressed by the North Carolina Courts.) In addition, if a community has covenants that were recorded less than 30 years ago, then the MTA has a provision allowing them to be renewed before the 30-year expiration date.  Communities need to quickly take stock of their situation and decide if they need to act.  Because the mechanics of applying the MTA to restrictions older than 30 years can vary, each situation must be evaluated independently.

There was a dissenting opinion in Auger, which means that the North Carolina Supreme Court can more easily consider the case if one of the parties appeals.