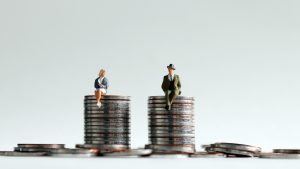 This is the second blog in a three-part series on Equal Pay. The first blog discussed who was covered under the Equal Pay Act (EPA). This blog focuses on what constitutes “pay.” Some may think that as long as everyone is paid the same hourly wage salary, then that is enough. It is not. The statute and the regulations are crystal clear as to what constitutes “pay.” Employers must consider, among other things, wages, benefits, bonuses, deferred compensation, the timing of the pay, and fringe benefits.

Section 206(d)(1) of the Fair Labor Standards Act is the Equal Pay Act, which reads as follows:

BOTTOM LINE: An employer cannot pay an employee of one sex, less than another employee of a different sex, for work that requires equal:

This blog focuses on the “Pay” part. When assessing whether an employee is paid less than another, what is evaluated? Read on…

WHAT IS CONSIDERED WHEN ASSESSING “PAY” (WAGES)

It is crucial for employers to understand what compensation means under the law. The federal regulations set it out. Generally wages include all payments made to an employee as remuneration for employment. The regulations are clear that this includes all types of compensation irrespective of when it is paid, or what it is called.

Employers must be aware of this important factor. All compensation is considered. It is not enough that the employees are paid the same in real-time, if one employee receives a better deferred compensation plan, or bonus. Companies must look at the wages in real-time, and also any future compensation owed to employees who are performing “equal work”. (The next blog will explain the definition of “equal work.”)

WHAT IT IS CALLED

The law is absolutely clear, that “pay” does not just mean money. According to the regulations, wages includes all forms for compensation irrespective of whether they are called:

The wages must be paid in the same medium of exchange. The regulations are also clear that it is not enough to attempt to equalize. Employers are “prohibited from paying higher hourly rates to all employees of one sex and then attempting to equalize the differential by periodically paying employees of the opposite sex a bonus.”

EXAMPLE: There are two employees of different sexes performing equal work (again the next blog will define and explain “equal work.”)

This scenario is violative of the Equal Pay Act. Under the law, the employer is seen as “attempting to equalize the differential by periodically paying employees of the opposite [other] sex a bonus.”

WHAT DOES THIS MEAN?