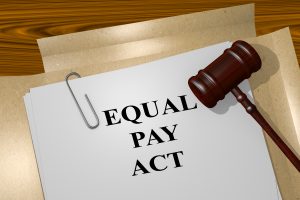 This blog is the first in a three-part series exploring the EPA. The purpose of these blogs is to break down (1) who is covered under the EPA, (2) what is “equal pay”, and (3) what is “equal work.”

Let’s first explore what individuals are covered under the EPA?

WHO IS COVERED BY THE EPA?

Before getting into the specifics of “equal pay,” let’s first look at the EPA as a whole. The EPA is a part of the Fair Labor Standards Act (“FLSA”). It follows that all employers who are covered under the FLSA, must abide by the EPA.

The federal regulations also specify that the EPA applies to men as well as women. Section 1620.1(c) reads, “[m]en are protected under the Act equally with women. While the EPA was motivated by concern for the weaker bargaining position of women, the Act by its express terms applies to both sexes.”

WHAT ABOUT NON-BINARY EMPLOYEES?

Many states, including Pennsylvania, have passed laws where an individual may mark gender “x” on their drivers’ license. Even more, there is a case pending regarding whether a third option for gender will be included on U.S. passports. The workforce today includes individuals who identify as male, female and non-binary. Many employees neither identify as male or female. The EPA was passed in 1963, and while the regulations have been updated, they do not reference individuals who do not identify as male or female. It is no surprise that the regulation confirming that the EPA applies to men too was written in 1986. The Act is peppered with the phrase “opposite sex” when in reality, the phrase is inapplicable in many businesses as there are employees who mark their gender as “gender x.”

Some employers may argue that the EPA does not apply to non-binary individuals, since they are not mentioned in the ACT or regulations. That line of thinking may expose the employer to liability.

First the regulation does not state that only men and women are protected under the EPA, it simply reads that, “[m]en are protected under the Act equally with women…” and by its “express terms applies to both sexes.” The reference to “both sexes” diminishes the position that non-binary individuals are protected; however, there is a viable argument that the mention of “men” and “women” does not exclude non-binary individuals. In other words, just because men are mentioned as being protected, does not mean that others are not also protected.

The EPA reads that no employer shall discriminate, “between employees on the basis of sex…by paying wages to employees…at a rate less than the rate [paid] to employees of the opposite sex….” As we know, the Supreme Court held in Bostock and Harris Funeral Homes that gender identity and sexual orientation are protected under Title VII. The Supreme Court held that “on the basis of sex” includes transgender and gay employees. These cases do not address non-binary individuals.

However, there is a position that gender identity or lack thereof is covered under Title VII. The EEOC, proclaims that, “[d]iscrimination against an individual because of gender identity, including transgender status, or because of sex is in violation of Title VII.” From the EEOC’s proclamations, the agency will treat non-binary individuals as protected by the EPA.

The EPA regulations link the EPA to Title VII. In fact, when the, “jurisdictional prerequisites of both the EPA and Title VII…are satisfied, any violation of the Equal Pay Act is also a violation of Title VII.”

Lastly, regulation 1620.27(c) actually references “opposite sexes” (plural) which supports the fact that there are more than two recognized genders. The section reads, “[u]nder the EPA a prima facie violation is established upon a showing that an employer pays different wages to employees of opposite sexes for equal work on jobs requiring equal skill, effort and responsibility, and which are performed under similar working conditions.”

(NOTE: The word “sexes” was bolded for effect. This regulation as written supports the position that there is more than one “opposite sex.” While this could have been a typo, and there are plenty of references throughout the Act and regulations to men and woman and “opposite sex” (singular), this text is supportive of the fact that non-binary employees are included and covered under the EPA.)

WHAT DOES THIS MEAN FOR EMPLOYERS?

Now, just because there is a gray area in the law, that does not eliminate or diminish exposure to litigation. If anything, attention will be given to employers who decide to compensate non-binary employees less than those who identify as male or female. Such litigation will clear up the issue. Even more, as mentioned above, it seems the EEOC will prosecute those employers who attempt to test this legal theory. From a liability exposure standpoint, employers must err on the side of paying all employees who perform equal jobs, equal pay.

(NOTE: Removing all references to gender from the EPA would streamline the Act and clear up any issues relating to applicability of the law. That would require an Act of Congress.)

Stay tuned for the next blog that will explain what is “equal pay” and the compensation that is included in the definition of wage.