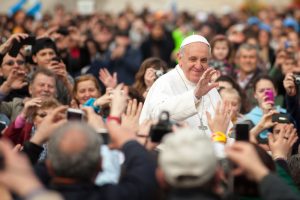 Premiering last week at the Rome Film Festival is a 2018 full-length documentary about the life of Pope Francis entitled Francesco. In this old, but never before released film, Pope Francis, for the first time, openly shares his belief that the LGBT community should not only be freely welcomed into the Church, but that the Church needs to embrace, accept and recognize civil unions for same-sex couples.

The Pope is clear and unambiguous in his discourse:

Homosexuals have a right to be a part of the family… They’re children of God and have a right to a family. Nobody should be thrown out, or be made miserable because of it.

This was not the first time Pope Francis has addressed the issue of the gay community and its relationship with the Catholic Church. Francis is believed to be the first pope to use the word “gay” publicly. Soon after becoming Pontiff in 2013, he made headlines when questioned about reports of gay clergy in the Church. Francis answered: “If someone is gay and he searches for the Lord and has good will, who am I to judge?”

Whether the Church’s hierarchical authorities will change the teachings of the Church to reflect the Pope’s views is yet to be seen. However, Pope Francis’s forthright support for the religious recognition of formal unions for same-sex couples may be the beginning of a cultural shift in the Church’s views regarding the gay community.