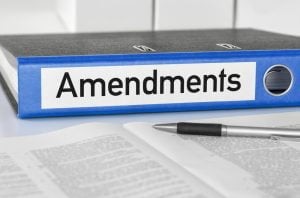 The Virginia legislature has adopted the following amendments to the Code of Virginia that we believe will impact your business operations and the landlord-tenant relationship in the Commonwealth of Virginia. The enacted bills are effective July 1, 2020.

Senate Bill 115 – Virginia Residential Landlord & Tenant Act; notice of termination to contain legal services information.
Affected Code Section(s): § 55.1-1202. Notice
This bill provides that no notice of termination of tenancy served upon a tenant receiving tenant-based rental assistance through (i) the Housing Choice Voucher Program, 42 U.S.C. § 1437f(o), or (ii) any other federal, state, or local program by a private landlord is effective unless it contains on its first page, in type no smaller or less legible than that otherwise used in the body of the notice, the statewide legal aid telephone number and website address.

Senate Bill 640 – Unlawful detainer; expungement.
Affected Code Section(s): § 8.01-130.01. Security deposits
The defendant on an unlawful detainer action, which was dismissed or nonsuited and the time in which the action may be recommenced pursuant to § 8.01-229 has expired, may file a petition requesting the expungement of court records related to the action, which the court shall grant without a hearing upon a finding that the action was dismissed or nonsuited and that the time for recommencement has expired. This law goes into effect on January 1, 2022.

Senate Bill 905 – Landlord and tenant; tenant’s remedy by repair.
Affected Code Section(s): § 55.1-1244.1. Tenant’s remedy by repair
This bill permits a tenant, under certain circumstances, to have a condition that constitutes a material noncompliance by the landlord with the rental agreement or with provisions of law, or that if not promptly corrected will constitute a fire hazard or serious threat to the life, health, or safety of occupants of the premises, remedied by a third-party licensed contractor or a licensed pesticide business. The bill provides that, unless the tenant has been reimbursed by the landlord, the tenant may deduct from rent the actual costs incurred, not to exceed the greater of one month’s rent or $1,500, after submitting to the landlord an itemized statement accompanied by receipts for purchased items and third-party contractor or pest control services. The tenant cannot invoke this statute if the condition was caused by the tenant, the tenant refused the landlord access to repair, or if the landlord already remedied the condition.

House Bill 6 – Virginia Fair Housing Law; unlawful discriminatory housing practices; source of funds.
Affected Code Section(s): §§ 36-96.1 through 36-96.3
This bill adds discrimination on the basis of a person’s source of funds to the list of unlawful discriminatory housing practices. The bill creates an exemption for an owner or owner’s managing agent, provided that such owner does not own more than four rental dwelling units or more than a 10 percent interest in more than four rental dwelling units in the Commonwealth at the time of the alleged discriminatory housing practice. The bill allows an owner or owner’s managing agent to deny or limit a person’s rental or occupancy of a rental dwelling unit based on the person’s source of funds for that unit if such source is not approved within 15 days of the person’s submission of the request for tenancy approval. The bill defines “source of funds” as any source that lawfully provides funds to or on behalf of a renter or buyer of housing, including any assistance, benefit, or subsidy program, whether such program is administered by a governmental or nongovernmental entity.

House Bill 99 – Landlord and tenant; victims of family abuse; evidence to mitigate low credit score; damages.
Affected Code Section(s): §§ 36-96.2, 55.1-1203, and 55.1-1209
This bill allows an applicant for a lease to recover actual damages, including all amounts paid to the landlord as an application fee, application deposit, or reimbursement for any of the landlord’s out-of-pocket expenses that were charged to the applicant, along with attorney fees, if the landlord does not consider evidence of the applicant’s status as a victim of family abuse to mitigate any adverse effect of the otherwise qualified applicant’s low credit score.

House Bill 590 – Eligible housing areas; tax credit for participating landlords, expands definition.
Affected Code Section(s): § 58.1-439.12:04. Tax credit for participating landlords
This bill expands the definition of “eligible housing area” for the housing choice voucher tax credit to include Virginia census tracts in the Washington-Arlington-Alexandria Metropolitan Statistical Area in which less than 10 percent of the population lives below the poverty level. Landlords who rent qualified housing units within such areas are eligible for an income tax credit. Current law only applies to such areas within the Richmond and Virginia Beach-Norfolk-Newport News Metropolitan Statistical Areas. The bill establishes a 2025 sunset date on the credit.

House Bill 1161 – Virginia Residential Property Disclosure Act, etc.; required disclosures, lead pipe.
Affected Code Section(s): § 54.1-2133. Licensees engaged by landlords to lease property
This bill requires any licensee who is engaged by a landlord and who has actual knowledge of the existence of any pipe, pipe or plumbing fitting, fixture, solder, or flux that does not meet the federal Safe Drinking Water Act definition of “lead free” to disclose such information to a prospective tenant.

House Bill 1401 – Landlord and tenant; remedy for unlawful ouster; ex parte issuance of order to recover possession.
Affected Code Section(s): § 55.1-1243. Tenant’s remedies for landlord’s unlawful ouster, exclusion, or diminution of service.
This bill provides that, upon receipt of a petition for an order to recover possession or restore essential services alleging a tenant’s unlawful ouster from the rental premises and a finding that the petitioner has attempted to provide the landlord with actual notice of the hearing on the petition, the judge of the general district court may issue such order ex parte upon a finding of good cause to do so. The bill further provides that an ex parte order shall be a preliminary order that specifies a date for a full hearing on the merits of the petition, to be held within five days of the issuance of the ex parte order.

House Bill 1420 – Landlord and tenant; charge for late payment of rent; restrictions.
Affected Code Section(s): §§ 55.1-1204 and 55.1-1250
This bill provides that a landlord shall not charge a tenant for late payment of rent unless such charge is provided for in the written rental agreement, and that no such late charge shall exceed the lesser of 10 percent of the periodic rent or 10 percent of the remaining balance due and owed by the tenant. This bill contains an emergency clause that allowed for its immediate enactment.

Questions about this or any other legal matters? Please contact us.