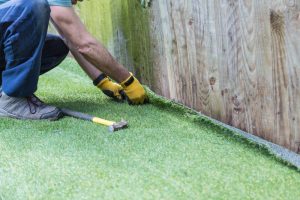 Homeowners and HOAs appreciate lush grass, but some homeowners got their hands dirty when they put down artificial grass without permission. The North Carolina Court of Appeals in Martin v. The Landfall Council of Associations issued a semi-important (more on this below) opinion regarding the authority of HOAs to enforce architectural requirements and to collect attorney’s fees.

Here’s the dirt: The Martins owned a home in Landfall, a golf-course community in Wilmington. The HOA’s architectural guidelines require that before any plants or vegetation can be planted, an owner must first obtain architectural committee approval. The governing documents required that all lots be “sodded.”

The Martins’ shaded property yielded little grass, despite repeated attempts to grow grass and after pruning the trees.

The HOA, willing to play in the mud, held a hearing and found the Martins in violation of the guidelines, and it levied fines of $100 per day against the Martins for their failure to obtain architectural approval. The Martins sued the HOA, and the HOA countersued, and so began a scorched-earth, multi-year lawsuit.

The Martins argued that a legitimate question existed whether artificial grass meets the definition of “sod,” and if so, that it should be permissible. The appeals court said that the definition of sod is immaterial and that the trial court need not decide this issue. The owners’ failure to obtain prior approval was grounds alone to justify the fines.

Moreover, the committee’s response followed prior court guidance: that the committee provided concrete suggestions about what was needed to comply; that the reasons provided were legitimate (i.e., that they were supported within the governing documents); and that a valid reason existed to reject the application. Although the court’s opinion briefly grazed over it, the committee made its determination by “consensus” (it was held without a vote without strict corporate formalities), but the Martins failed to provide legal support to erode the consensus-determination.

The worm turned for the Martins when two different judges, at separate hearings, rendered inconsistent decisions about the same legal issues. A first judge sided with the Martins and held that the case must proceed to trial since there were factual issues about the damages owed and whether the HOA proved the required elements to foreclose, whereas a second judge determined that there were no factual issues in dispute. A second judge cannot overturn a first judge on the same legal question, and thus, the Martins could proceed to trial on the issue of the amount of damages and the ability to foreclose.

The final legal issue was whether the HOA was entitled to recover its attorneys’ fees. A party may usually recover attorneys’ fees if allowed by statute or by contract. Even then, fees are usually awarded at the discretion of the judge. Enter the Planned Community Act.

The Planned Community Act (the condominium statutes have an identical provision) states that the prevailing party “shall be entitled to recover the reasonable attorneys’ fees and costs it incurs in connection with the collection of any sums due.” The use of the word “shall” within the statute mandates that fees be awarded, said the court. A judge’s discretion is limited to whether the rates and hours of the attorneys are reasonable.

This case could have been impactful, but the appellate court got stuck in the mud. For reasons unknown to the general public, the court did not “publish” its decision, instead treating it as an unpublished, non-precedential opinion.

In layman’s terms, this case is not binding on later courts (it is persuasive nonetheless). The court could have expounded upon earlier decisions to distinguish between the community’s declaration, its bylaws, and its rules and regulations, but it did not. The court also declined to dig into the effect of the “consensus” determination or the distinction between decisions by an architectural committee versus the board.

There are still takeaways and lessons learned.

First, the decision reiterates the two components to architectural decisions: completion of the architectural change as proposed, but the first, more basic requirement to submit a request.

Owners who fail to abide by either requirement do so at their peril. Second, fines of up to $100 per day can be levied and foreclosed if an owner fails to comply with architectural requirements. Third, statutes mandate that attorney’s fees are collectible by the prevailing party in a dispute over sums owed. Finally, committees and boards must supply an owner with sufficient information to help the owner meet the architectural requirements, but if supplied to the owner, architectural decisions are generally upheld by courts.

Let us know if you have questions about how to improve your HOA’s or condominium’s architectural protocols.