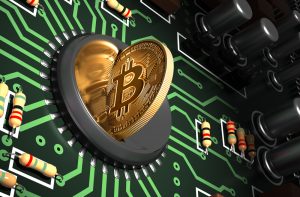 Bitcoins are created by “miners,” i.e. computers running specialized computations. Simply put, if an owner of such a computer runs these cryptographic calculations for long enough (“mines”), he will be rewarded with a bitcoin.

So if I buy a lot of mining equipment, can I mine a hundred bitcoins per hour?

No. The amount of bitcoins mined per hour by all the miners connected to the network is set in stone (actually it’s in the bitcoin code).

How can that be? If I add more computing power, should I get not more results?

No. The difficulty of the mining process adjusts whenever additional miners are added to the network. Thus, if you own 10% of all miners on the network, you should, on average, receive 10% of all bitcoins created per hour.

Then why not just keep adding computers and get 90% of the network?

Since the difficulty adjusts automatically, that gets expensive quickly. Eventually, the price of bitcoin reaches an equilibrium with the price of electricity (and other upkeep costs) of the miners.

Couldn’t I just change the code? So that I get more bitcoins per hour?

Of course you could. Except that the change will be obvious to everyone in the system – any changes you make will be baked into the bitcoins that you mine; these fake “bitcoins” you created will be rejected by the network and no-one will want to buy them.

So all miners do is create bitcoins?

That’s actually a side effect and an incentive. They create the blocks that make up the blockchain. For each block, there is an award of bitcoins to reward the miners for their expenses. We’ll explore the blockchain in my next post.