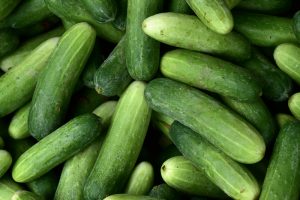 Good morning, afternoon or evening, and I hope your weekend is bringing you the well-deserved break you all need. I was derailed a bit this week in my market research but did spend some time with certain regulations of the U.S. Department of Agriculture (USDA). As some of you may know I am involved in protecting intellectual property around new plant varieties, and as I was preparing a communication on the new Plant Variety Protection (PVP) regulations published last week, I couldn’t help but dig into information published by the USDA on cucumbers, as I’ll need to understand some of that anyway.

I was sucked into the world of grades and standards. For those of you who don’t care, or maybe just don’t like pickles or cucumbers, feel free to move on to something else. Here are the grades:

U.S. Fancy: These cucumbers are fresh, firm, well colored, not overgrown, not injured, decayed or diseased, at least six inches long and no fatter than 2.375 inches. I guess that does sound fancy.

U.S. No. 1 Large: These are No. 1 cucumbers, but larger. They have to be at least six inches long “unless otherwise specified”, which again, I’ll have to investigate (maybe). By the way, they can be as long and fat as you’d like! I guess this might be what you want if you really like just eating cucumbers. You could probably turn one into a meal.

U.S. No. 2: As you may have guessed, this is a step-down. They only have to be “moderately colored”, which I guess means they can be a little brownish or yellowish. They can be deformed, just not badly (those of you who garden will likely have an opinion of what this means). They still can’t be injured, decayed or diseased, which I suppose is a good thing.

The USDA provides official and unofficial visual aids to help you determine what grade of cucumbers you have on your farm or in your garden. That’s nice. Here’s a link to the unofficial version.

If you look at this guide, you’ll realize I left a lot of detail out of my summary of the grades above. It’s not only about the outside, but also the inside of the cucumbers. Have you ever sliced open a cucumber to find a cavity in the middle? I have, and apparently that happens with what we call “detracting” cucumbers. My next question: Which cucumbers are best used for pickles?

If you want this information straight to your inbox, subscribe here »