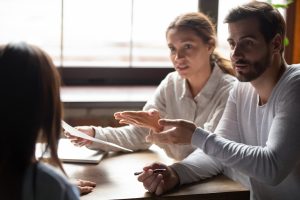 These days, it seems like there’s no such thing as a minor disagreement.  Normally, owner-to-owner disagreements between neighbors in a homeowners’ association or condominium association fall outside of the association’s authority or jurisdiction, but not necessarily when the disagreement reveals a more-sinister motive: discrimination.

HOAs and condos are subject to the Fair Housing Act (“FHA”), which prohibits housing discrimination against “protected classes” of individuals, including on the basis of race, color, national origin, religion, sex, familial status, and disability.  Until recently, the FHA was enforceable between the wrongdoer and the wronged.  Not so anymore.

The FHA regulations were enlarged several years ago to require third parties to take action against people who discriminate, and a third party who fails to take action can be liable to the injured party.  The FHA states that “a person is directly liable for failing to take prompt action to correct and end a discriminatory housing practice by a third-party, where the person knew or should have known of the discriminatory conduct and had the power to correct it.”

Ergo, if an HOA learns about one of its members engaging in discrimination against another party, the HOA may need to take preventative action, or the HOA or its board could itself be directly liable for the discrimination.  We fear that the law places additional requirements and risks upon volunteer boards of directors, who should not be required to intervene in disputes between owners.

HOA and condos in North Carolina and South Carolina generally regulate property, not people, and for this reason the FHA rule is a foreign concept to most associations.  The key phrase to trigger responsibility is that an association must have “the power to correct” the discriminatory conduct.  Few situations come to mind where an association could learn about discrimination and has the power to correct it, but at least one does.

Suppose an association’s Declaration of Covenants, Conditions and Restrictions regulates the types of signs that can be posted on a lot (typically, owners are limited to one “for sale” sign, subject to a maximum size, and sometimes, limited to a certain style).  If an owner posted a sign saying “[Insert a protected class] stay out!”, this could be a case where the association’s FHA obligations are invoked: the offending owner could be swiftly called to a hearing, and if the sign is not removed, fines could commence thereafter until the sign is removed.  It seems that the HUD requirement would require the swiftest and strongest punishment immediately, since a failure to promptly act could impose liability.

Few courts nationwide have addressed the law (likely due to its recent enactment), although in the context of landlords and tenants, a court recently held that a third-party landlord could be liable for discrimination engaged in by its tenants, against whom the landlord had the power to evict, which could prevent further discrimination.

In the one case involving an HOA, a federal trial court in Idaho viewed the law skeptically, observing that “HUD’s interpretation of the statute strikes me as incredibly broad” and that imposing a duty upon an association to police interactions among its members “would almost certainly create more conflict than it prevented.”  This Idaho case is not binding legal precedent, and while the judge’s criticisms mirror ours, the federal law is “on the books” and associations must intervene to prevent discrimination when they have the authority to do so.

For now, at least, associations need to stay vigilant and learn to recognize potential discrimination, so that the board can weigh its power to correct it in consultation with its attorney.