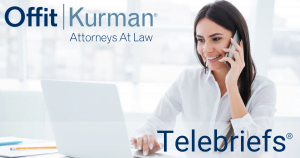 Senators Chris Murphy (D–Connecticut) and Todd Young (R–Indiana) recently introduced a Senate bill titled the Workforce Mobility Act. The bill seeks to ban non-compete agreements outside of the sale of a business or the dissolution of a partnership. If enacted, the law would empower the Department of Labor (DOL) and the Federal Trade Commission (FTC) to enforce the legislation through fines.

The Oklahoma Court of Civil Appeals made what may prove to be a significant determination in a case called Rose v. Berry Plastics Corporation. The employee, Rose, worked for Berry Plastics in the role of a machine operator. While he was trying to clear an obstruction by hand from a jammed machine, a co-worker of his triggered a so-called guillotine machine crushing Rose’s hand and wrist. The company’s policy was that after any accident a drug test would be conducted. Rose went through the drug test and tested positive for cannabis. He admitted smoking cannabis the night before but he denied being impaired at the time of the accident, which occurred about 10 hours after he had consumed the substance at home. The initial court upheld the termination but the Appellate Court, the Oklahoma Court of Civil Appeals, overturned the lower court’s decision and rejected the underlying inference that he was intoxicated. The court cited the fact that Rose overcame this presumption by showing up to work at 6am, driving apparently safely 45 minutes to work, operating his machine without incident for the first two hours of the shift, and showing no signs of unfitness or intoxication to his co-workers—and, consequently, that the employer offered no evidence of intoxication at the time of the accident.

As many readers are aware, McDonald’s recently fired CEO Steve Easterbrook after the company’s board found that he demonstrated poor judgment by having a consensual affair with a subordinate. The termination raised an issue that has gained traction particularly in the aftermath of the #MeToo movement, namely, should companies prohibit any kind of a consensual relationship between C-level employer representatives and subordinates, as opposed to consensual relationships between rank-and-file employees. Employers should review their employment policies and consider executing a) a policy which would prohibit any relationships between C-level executives and other employees, as well as b) a policy which would mandate that any co-employees involved in even consensual relationships disclose that information in a formal way to the company’s HR department.

Questions about labor and employment law or other topics from this week’s Telebrief?

The Telebriefs® are 30-minute, information-packed phone calls geared towards executives, HR directors, supervisors, managers, and business owners. Join Howard K. Kurman, as he discusses employment law developments occurring over the past two weeks that will most significantly impact employers nationwide. These twice-monthly phone calls are an easy way to stay current and compliant with the latest employment law developments that will significantly affect you and your company. The goal is to provide information and insights to help executives stay current with the latest workplace law developments and in front of trends, to enable proactive policy-making and management. Our guarantee: You will learn something useful on every call!

Register for the Telebriefs® »