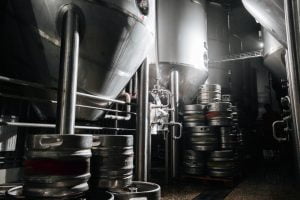 I used to think I wanted to make my own beer, but then I realized it takes too long and probably isn’t as good as my favorite off-the-shelf options. I do continue to be fascinated with the process though, and the number of small steps a brewmaster can take to set his or her product apart from the rest of the field. It’s microbiology, it’s chemistry, it’s just interesting, and as my neighbor and I like to opine, now is a great time to be a beer drinker with all the great options available out there.

There are a couple of things to consider at the outset that relates to quality and safety when it’s time to decide to make and sell your own beer. First, how do you know your brewing beer, and second, how do you know you can sell it to other people.

Under federal law, beer is a “malt beverage” as I mentioned last week. A “malt beverage” according to the law is essentially a fermented alcoholic beverage made from malted barley with hops, or their parts, and can contain other cereal or carbohydrates, added carbon dioxide, and “other wholesome products suitable for human food consumption.” That last part makes me think of the FDA, which is in charge of making sure beverages are indeed suitable for human consumption, which makes me think we need to be familiar with manufacturing quality controls before we start introducing beer into the marketplace.

Interestingly, a malt beverage is a malt beverage, even if it’s non-alcoholic, which means the Bureau of Alcohol, Tobacco, and Firearms (BATF) regulates labeling, not the FDA, although your beer still can’t be misbranded under FDA law. So basically, you have to be prepared to make a food-grade product and label it according to BATF regulations if you’re going to be shipping.

The BATF regulations have a fair amount in common with the FDA regulations when it comes to labeling. For one thing, you have to be able to tell who brewed the beer you’re buying at the store. Some states require alcohol content labeling of some malt beverages to varying degrees. You have to comply with state laws in that regard, so you need to know the laws of states where you are distributing. You have to declare certain additives and other substances. You have to disclose the presence of major food allergens.

BATF goes further in some ways. You can’t use a confusing brand name as to age, origin, identity or characteristics of the product, and there’s an interesting provision that allows people using brand names of foreign origin that were used for at least five years prior to August 29, 1935 (I’m interested to get the history on that), with certain qualifications.

Then there are several restrictions about the class of products being labeled. If you want to call something an “ale,” you had better know what that means. Oh, and did you know that “India Pale Ale” is a generic term?