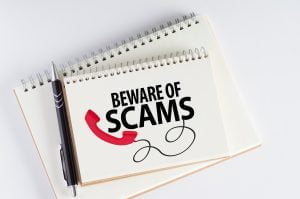 We all hear stories about the financial exploitation of older adults, but we don’t often hear good news about the exploiters getting caught and being punished.  The Washington Post recently reported on a scammer who picked the wrong target in a lottery scheme and got caught in an FBI sting.  Like most scammers, this scammer was persistent and persuasive.  He was also well-informed, but not quite well informed enough.  The scammer told his 90-year-old target that he had won $72 million and a new car in the mega-millions lottery, but the target needed to send the scammer $50,000 in taxes and fees in order to claim his prize.  The scammer called and e-mailed the target, and the target’s wife, numerous times.  The scammer knew details about the target’s life, job history, including that he had been an attorney and a judge, and even the target’s wife’s name.  The scammer told the target’s wife that he knew the wife had been alone the previous night, and that it would be easy to burn down her home.  The scammer didn’t know, however, that the target was also the former head of the FBI and CIA.  The target turned the tables on the scammer and helped the FBI catch the scammer in a sting.  Like so many scammers, this scammer was not in the U.S., so justice had to wait until the scammer flew from his home country of Jamaica to the U.S. a few years later.  After being arrested, the scammer pleaded guilty and was sentenced to 6 years in jail.

International scams are increasingly common among the elderly.  List of names of elderly targets are sold among scammers, and the scammers have stolen millions from their targets, often draining retirement accounts and savings.  I have been involved in numerous guardianship cases where older adults, all of whom had advanced educations, had excelled in their careers, and successfully managed their finances for many years, have been persuaded to give hundreds of thousands of dollars to scammers through various means, including cash, cashier’s checks, wire transfers, and gift cards.  Family members and friends are often reluctant to take action because the vulnerable adult becomes angry when confronted about what appears to be happening.  By the time the scammer is finally stopped, the vulnerable adult has often lost most, if not all, of their savings.

If you believe that a family member or friend may be the victim of a scammer, it is important that you take action as soon as possible.  In general, it is more important to protect the person’s finances than the person’s feelings.  Depending on the circumstances, there are several options to stop the scam and help the victim move forward.  Your best option is to educate any elderly family members and friends about the risk of financial scams, contact your elderly family members and friends frequently, contact the applicable financial institution to report fraud, contact Adult Protective Services, and consult with an experienced guardianship attorney if you think a family member or friend is being exploited.

If you have questions about Child Custody, Guardianship, or any other Family Law issue please contact Catherine H. “Kate” McQueen at (240) 507-1718 or  kmcqueen@offitkurman.com.