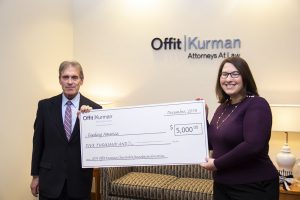 Anne Frank once wrote, “No one has ever become poor by giving.” In her spirit, and in the spirit of ending hunger this holiday season, the Offit Kurman Charitable Foundation has made contributions to Feeding America and Tony Robbins’s 100 Million Meals campaign and the firm is inviting its colleagues, friends, and neighbors to do the same.

For nearly 40 years, Feeding America has provided food to people in need through a nationwide network of food banks. Today the organization is the nation’s largest domestic hunger-relief organization, with over 200 food banks across the U.S. feeding 46 million people, including 12 million children and 7 million seniors. Feeding America’s 100 Million Meals Challenge, established by motivational speaker and philanthropist Tony Robbins, has provided over 315 million meals since its beginnings in 2014, and aims to provide 1 billion meals by 2025.

Founded in 2017, The Offit Kurman Charitable Foundation devotes the firm’s funds to worthy charities active in the communities Offit Kurman serves. In its first year of existence, the Foundation has supported numerous funds, nonprofit organizations, and community development and enrichment programs.

“In the end, we all do best when we are able and choose to do worthy things for those people among us who desperately need our assistance,” said Howard Kurman, Offit Kurman attorney and co-founder. “At this time of the year, when most of us are very inward-attentive, it is both invigorating and extremely self-actualizing to contribute to the welfare of our fellow brothers and sisters, irrespective of their nationalities, races, ethnicities, religions, sexual and gender identities, beliefs, or political affiliations. Perhaps in our own small way, both individually and from our firm’s institutional perspective, we can then encourage and foster a feeling of compassionate humanity in this country. This holiday season, I encourage each of our attorneys, clients, and peers to choose a worthy charity of their own and to do what they can to help someone else in need. I guarantee you that such a gesture will make you proud and will produce more personal satisfaction than any gift you could ever receive.”