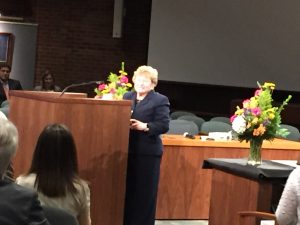 The Honorable Lenore R. Gelfman, affectionately known as LRG, was honored for her almost 30 years of service to the Howard County judiciary.

Since mandatory retirement is a thing for judges in the State of Maryland, she had no choice but to leave her beloved bench. However, she has been approved to sit in all of the courts in the State, so we will likely continue to see much of her, less the burdens of being the administrative judge.

The gathered masses heard of the 4 am phone calls to enable her to determine whether courts should open given dicey weather conditions, her extensive knowledge of trivia, her attention to the details of the lives of those who surround her, and her commitment to listen, weigh, and appreciate the gravity of the decisions she made.

According to our County Executive Allan Kittleman, her perseverance played a significant role in the acquisition of a new courthouse for the county, expected to open in 2021. As an attorney who has practiced in numerous jurisdictions in the state for almost 37 years, a new courthouse is sorely needed and has been so for many years. He presented her with a proclamation naming September 13 as Judge Gelfman day.

The event was about Judge Gelfman, but also provided a unique opportunity. It’s not too often that multiple generations of lawyers get together to celebrate anything. That happens when one of our contemporaries retires. What a fabulous reunion to be able to see those whose paths don’t cross as frequently anymore.

Thank you, Norie, for the service you have provided, for the examples you have set, and for the appreciation of the consequences of your decisions. We wish for you a better pace of life, over which you have more control. 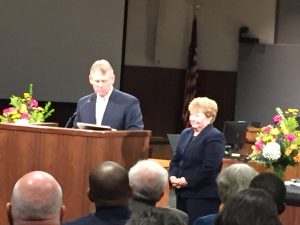 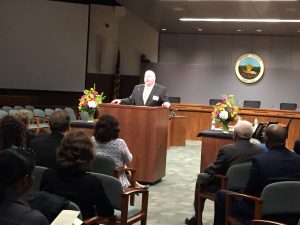