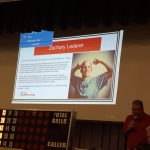 On Friday, the event occurred at OLPH.  Each game of Bingo is played in honor of a particular person.  One of those games was played in honor of my darling Jim, who I lost in 2013.  When the picture of him was displayed on the screen at the front of the room, you might imagine that it tore my heart out.  For we had the type of life people dream about when they get married.  We were put on this earth to love each other, and 33 years together was not enough.

Each year, I take a group to the event to enjoy and to remember.  The prizes are $250 gift certificates to local restaurants, which are bought and donated by the sponsor of the game.  The room is also filled with silent auction items.  Food is generously donated by Tino’s Italian, owned by my friend and fellow Rotarian, Lance Cook.  While there is sadness in remembering, there is also joy in being together.

Year after year we see the same groups returning, while others are new.  Zaching Against Cancer awards scholarships to those in need, while still providing daily need assistance to those battling this horrid disease.

This event happens each April, so look out for the opportunity to spend a fun night, while contributing to a wonderful cause. 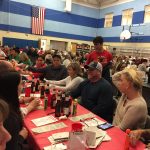