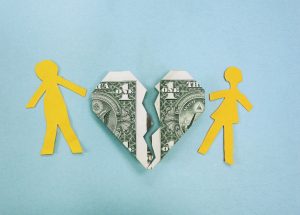 Individuals going through a divorce face many difficult issues, including the financial dissolution of a marital partnership; deciding how to divide assets, and who pays which financial obligations.  As the parties negotiate their property agreement, each party should be asking, “What happens to the property agreement if the other party files for bankruptcy before performing his or her end of the bargain?”

Below are merely two of many scenarios that unfold when divorce is followed by a bankruptcy filing by one of the parties.  The consequences of the bankruptcy filing are often devastating to the other party, and deprive the other party of the benefits bargained for in their property agreement.  Let’s take a closer look at these two scenarios and what we can learn from them.

The Lesson:  If Jim files for bankruptcy under Chapter 7, the most popular form of bankruptcy, Jim’s obligations to the credit card companies are discharged, but Betsy remains liable.  Betsy may be able to retain a right for indemnification from Jim under the property settlement agreement if there is indemnification language in the property settlement agreement.  She can file a complaint to determine that the debts are nondischargeable under Chapters 7 and 11 as a debt incurred to a former spouse under a separation agreement and she will likely prevail.  Also, the bankruptcy court may hold the debts as nondischargeable under Chapters 7, 11 AND 13 if the court finds the obligations were in the nature of alimony, maintenance and support.  However, if the bankruptcy court finds that the obligations in the property settlement agreement are not in the nature of alimony, maintenance and support, Jim may discharge his obligations to the credit card companies and Betsy under Chapter 13.

If the important question was asked “What if he files bankruptcy?” Betsy may have realized that she should not rely on Jim’s promise to pay the joint debt and she may be stuck with all the joint debt.  Instead, Betsy might have insisted that Jim pay all the joint debts in full (or transfer the balances to accounts in his name only) before agreeing to a reduction in alimony payments.  Betsy would have made sure that Jim paid all joint debts in full and closed all joint accounts before her concessions on alimony took effect.  Exiting a marriage with joint debts lingering is a bad idea for many reasons, not the least of which is the risk of a bankruptcy filing by the one who has promised to pay the joint debt.

Sheila and Bob’s former marital home is valued at $350,000 and they agree that if they sold the home now, there would be $100,000 in sale proceeds available to them after paying off their mortgage and costs of sale.  Sheila wants to continue to live in the home for three more years, until their youngest child graduates from high school.  Although Bob is concerned that Sheila will not make the monthly mortgage payments on time, he agrees that Sheila and their youngest child can remain in the home for three years.  The monthly alimony and support Bob agrees to pay factors in the monthly mortgage payments that Sheila will be responsible for paying. Their agreement provides that after their youngest child graduates, they will sell the home and divide the proceeds equally.  The court entered a judgment for absolute divorce that, among other things, approves their property agreement. Sheila subsequently failed to make several mortgage payments when due.  When Bob received a default notice from the mortgage note holder in the mail, he filed for Chapter 7 bankruptcy.  A few weeks later, Sheila is served with a Complaint from Bob’s bankruptcy trustee requesting authority from the bankruptcy court to sell the home, retain half the proceeds to pay Bob’s creditors, and pay half of the proceeds to Sheila as the co-owner of the home.  The Trustee’s realtor posts a “For Sale” sign in the front yard.   The trustee may have empathy for Sheila’s predicament, but the trustee has a duty to liquidate Bob’s property in order to pay Bob’s creditors.

The Lesson: Case Study 2 is an example of how one party’s filing for bankruptcy after divorce can completely disrupt the other party’s plan for moving forward.  For Sheila, having their youngest child remain in the home through high school was an important part of her plan for moving forward after divorce, but after Bob filed bankruptcy, his ownership interest in the home vested in his trustee, who is obligated to sell the home to pay Bob’s creditors.  In a matter of a few months, Sheila and their youngest child will have to find another place to live.  Had Sheila been mindful of the devastating consequences of Bob’s bankruptcy when they were negotiating their property agreement, she would have insisted on additional terms in their agreement that would afford her some protections should Bob file for bankruptcy.  There may be a chance for Sheila to save the home though since she will have a right of first refusal under the Bankruptcy Code.

If you have any questions about the consequences when one party to a divorce files bankruptcy, please Contact us