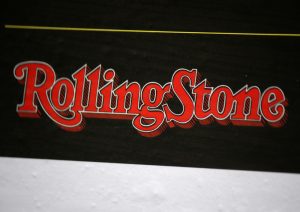 Last week, the New York Times reported on an unexpected acquisition opportunity. After 50 years, the Wenner family is letting go of its controlling stake in what may be the most influential music publication in American history. Yes, Rolling Stone is officially up for sale.

As the Times details, Rolling Stone’s collapse follows a recent spate of poor editorial and managerial decisions, in addition to larger issues in the publishing industry. Analysts believe the magazine experienced a sharp reputational decline starting in 2014, when a feature story about an alleged gang rape at the University of Virginia was discredited after investigators discovered that the primary source had largely fabricated the incident and that the article’s author had not followed proper journalistic standards. And this newsmaking blunder, which the Columbia Journalism Review included on its list of “the worst journalism of 2014,” coincided with numerous financial problems:

“In 2001, [Rolling Stone founder] Jann Wenner sold a 50 percent stake in Us Weekly to the Walt Disney Company for $40 million, then borrowed $300 million five years later to buy back the stake. The deal saddled the company with debt for more than a decade, preventing it from investing as much as it might have in its magazines.

At the same time, Rolling Stone’s print advertising revenue and newsstand sales fell. And as readers increasingly embraced the web for their news and entertainment, Mr. Wenner remained skeptical, with a stubbornness that hamstrung his company.”

Wenner started Rolling Stone in 1967. He has remained at its head since, maintaining a tight grip over the company’s direction. His reluctance to exit may have harmed the business’s value: it is hard to imagine that the magazine looks more attractive now than it would have five, ten, or twenty years ago, with a stronger brand and a better foothold in a healthier publishing industry. Moreover, a defamation lawsuit stemming from the UVA article could compel Rolling Stone to suspend the sale.

Regardless of Rolling Stone’s future, this story should serve as a reminder about the need for founders to consider exit strategies early on, as well as the need to continue to update one’s business to be current with the times. Business owners should seek the help of an experienced M&A attorney early on to maximize their organization’s value and plan ahead effectively, rather than react in a delayed manner to crises outside of their control.

Contact us today, to find an M&A and business attorney that can help you.

Mr. Mercurio is a Principal and the Chair of the Firm’s Business Law and Transactions Practice Group. He serves as outside general counsel to clients on matters related to corporate and business law, commercial transactions, government contracting, healthcare, construction services, and real estate. As a strategic partner to firm clients, Mr. Mercurio regularly counsels entrepreneurial individuals and assorted entities on all aspects of business and commerce including formation and structure; ownership, management and control; financing and capital; expansion and acquisition; sale and transfer; and contraction and dissolution. He is well versed in the various issues and challenges companies of all sizes and industries face in the business life cycle including start-up, maturation and end-stage considerations.