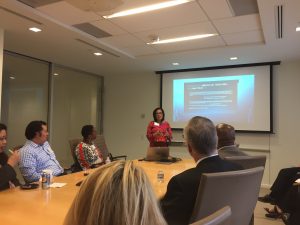 On Tuesday, May 23, 2017, Offit Kurman hosted its second Diversity Speaker Series in its downtown Philadelphia office. The evening event featured the Honorable Stella Tsai, who addressed Offit Kurman attorneys and other local professionals and leaders in the community on inherit bias in the legal industry. This was an exciting time to host the Judge, as just days earlier she won the primary election for a seat on the Court of Common Pleas of Philadelphia County.

While Judge Tsai was in private practice for years, she also devoted numerous hours to pro bono work involving immigration issues. As a legal professional and the daughter of immigrants, this was an opportunity to serve the community. In both the private and public sectors, Judge Tsai has been very active in trying to improve the city of Philadelphia, being appointed by Mayor Nutter to both the City’s Zoning Code Committee and the Board of Trustees of the Community College of Philadelphia. Judge Tsai devoted her time and ability to lead diversity initiatives including the Asian Pacific American Bar Association of Pennsylvania, the Women’s Law Project, and the Philadelphia Diversity Law Group, among other non-profits. In 2016 Judge Tsai was appointed as a judge on the Court of Common Pleas by Governor Tom Wolfe.

Judge Tsai focused her discussion on the inherit bias in the legal profession. She engaged the audience using open dialogue, real life examples and even pop culture references of how people of varying race, gender, age and other factors are treated in the political spectrum and the legal field. Throughout her presentation, she touched on her own experience with different biases throughout her legal career, service to the city of Philadelphia, and life in general. She also addressed the comments and experiences shared by the audience, as to how the legal community’s biases can be identified and overcome.