Promoting the growth and success of movers, shippers, and logistics personnel around the world 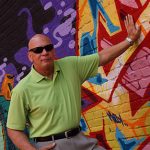 Terry Head is the President of the International Association of Movers, the moving industry’s nonprofit trade association. Located in Washington, DC, IAM has over 2,000 members, representing more than 170 moving, shipping, forwarding, logistics, and cargo auditing companies around the world. The organization provides its members with exclusive education and professional development programs, political advocacy, and global networking opportunities. Since 1962, IAM has hosted an annual meeting and trade show—the largest in the industry.

You’ve worked with numerous government agencies over the years. Do you have any DC stories you can tell?

TERRY HEAD: Here in the DC area I’ve had some very interesting clients—federal agencies, some that go by initials and others that don’t—and you’d have no idea the kind of stuff that we would get involved in, not necessarily in moving people but on the logistics side of the business that we get involved in.

I’ll tell you a quick story that happened when I was early in the industry, when I first was in sales. I’d never been in a sales job before, and they’d never had anybody selling international at this company before, so I thought, okay, well, who moves internationally? Foreign embassies do, and DC is full of foreign embassies, so I got my business cards and got in my car and I drove around and went to every embassy I could walk into, every embassy that would let me in the door. I at least left my business card and said, “If you’ve got anybody moving, give me a call.”

Well, about three weeks after I did a real heavy round of embassy calls, the switchboard operator said, “Terry, there’s somebody here to talk to you.” I asked, “Who is it?” She said, “It’s somebody from the FBI,” and I said, “Okay, I’ll be right out.” And sure enough the gentleman was from the Alexandria field office, and he asked me, “Is there somewhere we can talk?” I said, “Yeah, we can go to the conference room here,” and he spread out all these photographs taken of me walking in and out of these embassies. I’m thinking: oh my goodness. And he goes, “We want to know why you’re going in and out of these embassies.” I explained to him: “I’m a salesman for a moving company. I’m looking to do international moving through these embassy personnel.” He questioned me probably for a good 20–30 minutes and then he finally took his photographs and left. I thought, well, that was interesting.

About three weeks later switchboard operator said, “Terry, there’s somebody here to talk to you. I don’t know but he’s from the FBI.” I walked out and this gentleman was from FBI headquarters and he asks, “Is there is someplace we can talk?” I said, “Sure, we can go into the conference room here.” He said, “We understand that you have the ability to go in and out of embassies and potentially have the ability to be moving some of these foreign diplomats.” I said, “Yeah, we’ve started to develop a pretty good clientele. They’re calling for quotes, at least.” He asked, “Would you be interested in helping us identify any of them that might want to defect?” I’m thinking they’re asking me to basically be a spy, and I said, “I will certainly keep it in mind, and if anybody gives me that feeling, I will certainly give you a call.” He said, “It’s probably not necessarily going to be the diplomat or the embassy personnel themselves, but it might be their spouse. And that is why we think you’re so key, because you’re the one going into the home to actually do the estimate, and you’re in a position to get a sense of what the spouse’s thinking is. And, a lot of times that’s the key to us turning”—that was his term—“turning these people and getting them to defect.”

It was an interesting scenario. I never had one happen, and I can honestly say I never picked up the phone and called the FBI, but it was just the fact that, number one, they were watching and they were using people like me, John Q citizens, to basically assist them in their work.