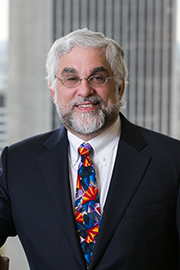 Jay M. Levin is a principal-level attorney in Offit Kurman’s Philadelphia office. An experienced appellate lawyer with over thirty years of experience in briefing and arguing appeals in state and federal court, Jay focuses his practice on representing policyholders in disputes with insurance companies involving all types of insurance coverage. His extensive litigation experience comprises multi-million dollar property insurance coverage cases, including suits involving policy construction and application, cause and origin, valuation, and business interruption issues. Jay has been ranked as a Band 1 lawyer in Insurance—Pennsylvania (Chambers USA, 2015-2016), recognized as one of the Best Lawyers in America for Insurance Law, and selected for inclusion in Pennsylvania Super Lawyers.

Jay recently spoke with us about his background, his legal perspective, and the ways in which he has served his clients at Offit Kurman.

OFFIT KURMAN: What was the most interesting case you’ve ever worked on?

JAY LEVIN: I’ve had some very interesting cases. The largest case I ever worked on was the World Trade Center insurance coverage case, which involved whether the attack on the World Trade Center was one occurrence or two occurrences for insurance coverage purposes. There was roughly $3 billion in insurance coverage at issue in that case, although only about $300 million for my client. It was a three-month trial. The first trial was solely on the issue of what policy language applied, because there was a big dispute as to what the policy language was supposed to be, because at the time of the attack, no policies had been issued yet for most of the companies. It was a really interesting trial. It was three months in New York in Federal Court, in front of Judge Michael Mukasey—who went on thereafter to become Attorney General of the United States in the George W. Bush administration—and you saw some of the best-known lawyers in New York and insurance lawyers from out of town. Herb Wachtell was one of the lawyers representing the policyholders, and you had some of the leading insurance coverage lawyers, and it was very interesting to participate in the trial and see the different styles of the different lawyers and how some appealed to the jury and some did not. It was especially gratifying when the jury found in favor of my client, saving the client $300 million. That was one of the most fun cases.

At the exact opposite end of the spectrum, I tried a small case, a bad faith case for an insurance company—at that time, I was representing insurers—and it was non-jury in Philadelphia, and it was obvious from day one that the judge just hated the case. He listened to the case and at one point one of the plaintiffs broke down crying, and he looked at her, and like Tom Hanks in A League of Their Own said, “there’s no crying in court.” As soon as the case was over, he just issued findings of fact and conclusions of law from the bench, and we won that one as well.

Tell us about the Insurance Recovery practice group.

How long have you practiced insurance litigation? When did you decide to represent policyholders instead of insurance companies?

In my first firm, I was the partner doing most of the commercial litigation and some insurance defense litigation. Then I moved to another firm and the job they offered me was in the insurance coverage department, so I became an insurance coverage lawyer, because that’s the job I took. I worked very closely with some of the founding and senior partners of the firm and learned an enormous amount and kept advancing through the years. Eventually, at the time I left that firm, I was chair of their National Insurance Coverage practice group.

In 2005, I was tired of representing insurance companies, so I switched sides and began to represent policy holders. I found it to be a much more fulfilling practice, a practice where the clients were frankly much more grateful when we achieved a good result. It was a very good change of pace—to just do the same work but switch sides.