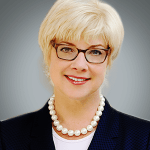 Elizabeth Cromwell is the president and CEO of the Frederick County Chamber of Commerce. Since 1912, the Chamber has acted as liaison between the Frederick County community and the region’s businesses. It was the first chartered Chamber of Commerce in the United States and, over a hundred years later, continues to be a vital contributor to Frederick County’s evolving economic climate. The Chamber’s mission is to advocate for local businesses and create public–private connections that improve both sectors’ economic welfare. Elizabeth has served as Chamber president and CEO since July 2014. Prior to her current position, she served as Corporate and Community Partnerships Director for the Frederick County Public Libraries for 12 years.

EDWIN WARFIELD: The Frederick County Chamber dates all the way back to the first national Chamber of Commerce. Can you run us through the history?

ELIZABETH CROMWELL: The Frederick County Chamber of Commerce is the first chartered chamber of commerce in the country. What that means is that there had been informal groups around the country, where merchants had been coming together to try to help each other and speak with a common voice, but when the US Chamber of Commerce was formed in 1912, there was a call from them for local chambers to actually become organized and form under a charter.

The story is that the very next day a group of gentlemen headed right down to Washington, D.C. on their horses and, as a result, Frederick is the first chartered chamber of commerce in the country. It’s also the largest in the State of Maryland.

You mentioned that when it was offered, you didn’t think of taking the job right away. What was your first impression of the Chamber of Commerce?

My initial impression of the Chamber before I started working there was—and I’ll just be totally honest—is this is the voice for big business. That’s what I had heard from a lot of people, and while I do think that is true to a degree, I think I misunderstood the motivation. I think what is behind that is that we have a small number of very large companies who have people whose job it is to participate in the process and who can come to meetings. Sixty-five percent of our membership, though, has fewer than ten employees, so really we have a lot of small companies. The problem, I think, and the reason I had that perception is that there isn’t really a very strong channel for people who can’t get out from behind the cash register or leave the office. That’s why we’re working on a lot of improvements to our online experience, so that we can more accurately interact and poll our smaller members on a regular basis the way we can easily do with our large businesses.

How else do you spend your energy on members?

We are always looking for new ways to bring value to our members. I’ve been there now for a year and a friend of mine always used to like to say that God gave us two ears and one mouth for a reason. And so, I have spent the last year listening to as many people as I can about not only their thoughts about the Chamber, but what’s important to their businesses. That’s what I care much more about. I don’t want to be going around talking about how great the Chamber is all the time. I want to be talking about how whatever is important to you, and you, and you—how we can find some common threads that we can then create some real value. We’ve just kind of come through that process right now.

I’ve talked to lots of current members, former members, elected officials, academic folks, and have taken in an enormous amount of information. What has come out of that is remarkably consistent. What I have found is that there are three big buckets of issues that people really want to focus on for their own company’s future.

The second big area of issues that has come from so many people is an effort to kind of re-brand Frederick and to make the case for Frederick County, for both current businesses and for businesses across the state that don’t really know an accurate picture of what’s happening here in Frederick. The rebranding issue is very large.

The third big issue is having a workforce-prepared population and making sure that what we’re educating our students in is what we actually have jobs for.

Those three issues were across the board left, right, center. Everybody is concerned about those three things. So, my goal is to start not only making some plans to make headway over the next five years in those areas, but also hopefully to create some benefits for members that really tie into those three areas.

How important are new members for the Chamber right now?

Growing our membership is important to me. It’s not the most important aspect of membership to me. Retention is the most important attribute. Back in 2012, the Chamber turned a hundred years old and there was a big push to get to a thousand members by the hundredth birthday, and they did. At the time that was phenomenal, and it was a big deal, and over time, I think maybe there were some people who joined that maybe weren’t the best fit. Maybe there was a lot of pressure at that time. What I’ve done since I have been there over the past year is really scrubbed the membership to make sure who do we really have here that’s active? How do we turn members into believers? Because, right now, we have a lot of members we have a lot of believers too. But that’s the piece of it that I’m more interested in, rather than just going out and pounding the pavement and looking for any new member. I want the members that we have to make sure that they’re maximizing their return on investment. It’s not an inexpensive group to join, and so if you aren’t proving every day that that investment is a better value than some other place that they could put their money, then, you know, what are we doing here?